Children with Type 1 Diabetes are invited to read about the adventures of Tim Dinosaurus - a heroic dinosaur spy foiling the plans of an evil villain. As well as his Super Hero style missions, Tim has an additional challenge to overcome, because he also has to manage his Type 1 Diabetes.

Hypo Dino is the creation of Katie Courtney and Ava Morgan, both aged 9. Katie was diagnosed with Type 1 Diabetes in June 2017. Shortly after her diagnosis the girls were inspired to start writing and illustrating a book about Hypo Dino and his adventures after a local author visited their school.

Katie brought the picture book to one of her Clinic appointments, and her team asked if she would be willing to share it with other children in Wales.

“Tim is not just a dinosaur, he is a dinosaur spy,” explains Katie. “And he also has Type 1 Diabetes. Sometimes on a mission he has a hypo which stops him from battling his enemy, the evil Doctor Nocter.”

“Hypos are a fact of life for almost all people with Type 1 Diabetes,” says Dr Chris Bidder, who is Katie’s Consultant at Morriston Hospital in Swansea, "They can make you feel tired, irritable, unwell and dizzy.

They also happen at inconvenient times – which is what Tim finds out in Katie and Ava’s book.”

Carol Fraser is a Diabetes Specialist Nurse in the Paediatric Team at Morriston Hospital, and has known Katie and her family since Katie was diagnosed.

“When Katie showed us her book, we thought it was great,” she says.

“It’s funny, and we think a lot of children will relate to hypos sometimes getting in the way of important stuff, like battling evil geniuses and saving the world."

"As it’s written by the girls, we’re hopeful that other young children faced with a diagnosis of Type 1 will identify with Hypo Dino. It also sends out the positive message that while Type 1 Diabetes is a challenge, and can sometimes get in the way, it shouldn’t stop you from having fun and following your dreams.”

“We asked the Children and Young People’s Wales Diabetes Network if Hypo Dino would be something that could be given out to other children with Type 1 Diabetes in Wales,” says Carol.

“The Network has been very supportive in printing Katie and Ava’s book so that it can be given out in clinics.”

“This is the first time the Network has published something for children and young people that has actually been written by children for other children,” says Dr Bidder.

“That’s exciting in itself, and makes Hypo Dino special.” 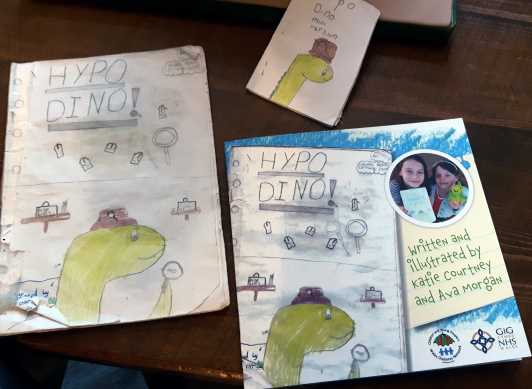 Further adventures of Tim Dinosaurus may follow as Katie and Ava have already started working on sequels to the original.

"We are working on a story of when Tim goes on holiday,” says Ava. “And also another book about Tim having to be brave when he goes to get his blood tests done. I enjoy drawing the dinosaur when Katie writes the stories.”

Hypo Dino will be available for all children with Type 1 Diabetes in Wales through their clinics.

Copies can also be requested from the Children and Young People’s Wales Diabetes Network by emailing cyp.diabetesnetwork@wales.nhs.uk