Virtual technology keeps an essential service going during the pandemic

A centre named after one of Britain’s best-loved celebrities has helped Swansea Bay maintain a vital service during the pandemic.

The specialist Stammering Service provides support to all age ranges, from pre-school children right the way through to adults.

It involves assessment and, when appropriate, therapy, based on a variety of award-winning intervention packages.

Before the pandemic, this was all completed face-to-face, with adults seen in a clinic in Singleton Hospital and youngsters in the Hafan Y Mor children’s Centre, which is part of the Singleton site.

But as Covid-19 spread to the UK, the service continued to meet their needs – but by adopting a virtual approach, with the support of the Michael Palin Centre for Stammering.

Speech and language therapist Claire Hayes-Bidder (see main photo above) explained there were two types of stammers, developmental and acquired.

Developmental stammers usually affect children aged between two and five years old as they learn to talk, which most will grow out of.

Some of these families come to the service for specialist advice to support their child in resolving out of their stammer.

There are also children who present with a more persistent pattern of stammering. They also often benefit from specialist support to increase the likelihood of them resolving out of their stammer or reduce its impact.

“This includes targeting parents and teachers, offering strategy-based intervention to support interaction and minimise the impact of the stammer on the child as soon as we can.

“Depending on the different factors involved in a child experiencing stammered speech, we know the longer they stammer for, the less likely the stammer is to fully resolve.

“For some children, research has shown this can take up to four years.” 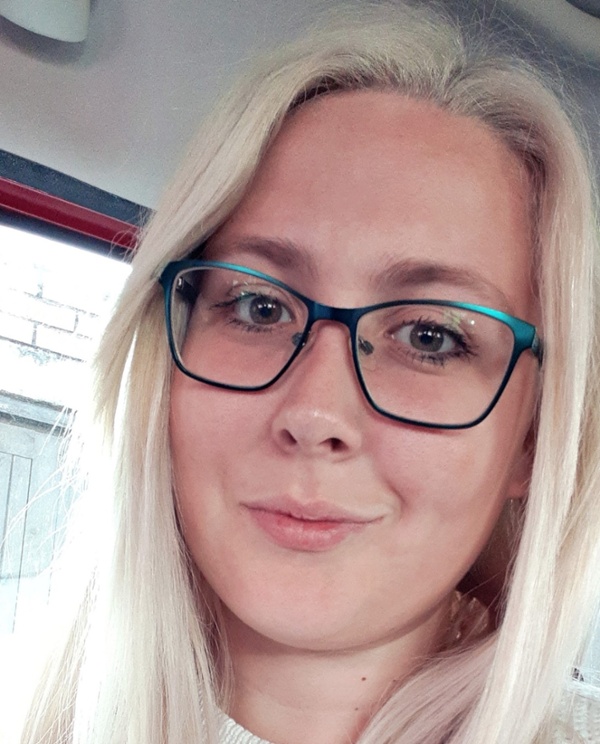 Claire said that, with the onset of the pandemic, she had to think of how the different needs of service users and their families could be met, particularly children who were showing signs of a more persistent stammer that they could carry into adulthood.

This is where telehealth, using Microsoft Teams, came to the fore, allowing the service to support families and individuals without them having to attend a physical clinic.

Left: Rachel Davies, one of the many people to have benefited from the service, both before and during lockdown

And the support of the Michael Palin Centre for Stammering, with which the Swansea Bay service has close links, proved invaluable.

The London-based centre opened in 1993 as a partnership between the charity Association for Research into Stammering Childhood – now Action for Stammering Children – and the local NHS trust.

That same year, actor, broadcaster and writer Sir Michael Palin, whose father was a person who stammered, gave his name to the centre and became a vice-president of Action for Stammering Children.

“When the pandemic happened, the centre was quick off the ground getting webinars out about how we could deliver some of our therapy approaches to young people and their families.

“Having the support of the Michael Palin Centre behind us has been really encouraging,” said Claire.

“Telehealth isn’t suitable for everyone but there has been a big take-up with young children’s families in particular.

“They have gone for it and really enjoyed it. We’ve had some lovely feedback and encouraging therapy outcomes.”

Being able to continue using the service during the pandemic has been vitally important for Rebecca Jones and her 11-year-old son Callum, who has been with Claire since he was three years of age.

Before Covid, Callum would usually have eight sessions a year in person with Claire, usually spread across eight to 10 weeks.

“Callum has a severe stammer and when the pandemic happened, it was hard for him to understand and to talk over the computer,” said mum Rebecca, who lives in Swansea.

“It wasn’t ideal but we got through. Claire did really well with him.

“If we hadn’t had Teams, if he hadn’t been able to have any sessions with Claire, I just don’t know how I would have coped.”

Contact was not limited to those virtual sessions. When Callum moved up to the comprehensive school, his stammer worsened considerably and Rebecca decided to email Claire for advice.

“Claire phoned me the next day and talked me through it,” she said. “I don’t know what I would have done without that support.

“It was the worst Callum’s stammer had been and I felt so much out of my depth.”

When a child is first referred into the service, an in-depth assessment is carried out over several sessions. Much of this can now be done via telehealth.

This can all be delivered via telehealth, which has also been used to support older children attending comprehensive schools.

Collaborative working with Swansea and Neath Port Talbot councils meant it was possible to bring pupils together into virtual groups no matter which school they attended or where they lived if the schools were closed.

“One of the things with older children who stammer in particular is they often feel very isolated and of course Covid has amplified that for many,” said Claire.

“We know being a young person who stammers can have an impact on their mental health.

“So the group sessions have helped to reduce that feeling of isolation, particularly about their stammer.

“We bring them together, check how they are feeling and if we can support them with anything in relation to their stammer, inside or outside of school.

“We show them some of the supportive advice that’s online, websites they can access, and send them information that we end up talking about in these group sessions, and play games.

“The telehealth sessions have helped them understand they’re not alone, reducing that feeling of ‘it’s only me’ and focusing on finding solutions for anything they may be having difficulty with.”

Claire has also been running an adult stammering service on Thursday evenings. She said it had been very successful and well-attended.

“I’ve had some lovely feedback from adult service users,” she said.

“They’ve enjoyed it and it has worked out incredibly well. They can attend after they’ve come in from work. Without telehealth this would not have been possible. It has been a real win.”

One of the many people to have benefited from the service, both before and during lockdown is Rachel Davies from Swansea.

Rachel, now 24, developed a slight stammer at the age of 13.

“It just eased off, but it came back when I was in my teens and it got worse,” she recalled.

“Before lockdown, I had face-to-face speech therapy sessions with Claire. Then during lockdown, we did it over Teams.

“At first, I was a bit nervous about it. I’d never used it before. But once I was a few weeks in, I found it ideal.

“I was comfortable, in my own home. I could still speak to Claire and it was nice to be in my own place and relaxed. It was brilliant.”

On Claire’s recommendation, Rachel signed up for a course which she said helped her accept her stammer and be more open about it.

“I used to be ashamed of it but it’s part of me. It’s better for me to be open about it. It’s something I have to live with and cope with, and find a way for it to be part of my life.

“The course has taught me not to be afraid of stammering – not to be judgemental about myself or ashamed. 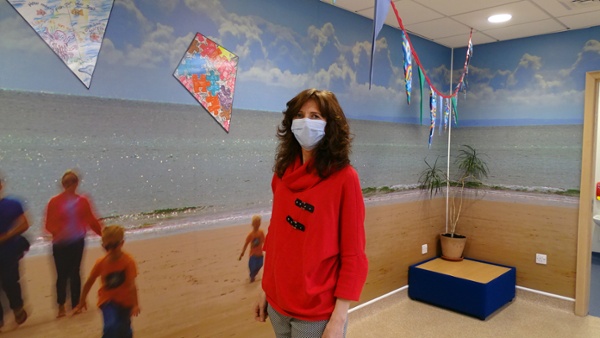 “But if I hadn’t been able to have those Teams sessions with Claire during lockdown, it would never have happened.”

The Swansea Bay service is part of an all-Wales development forum and Claire sits on a board of all-Wales therapists managing children, young people and young adults who stammer.

Because of these wider links she already understood the potential of telehealth, which has been successfully used elsewhere in the UK.

And she believes it will still have a role to play in the future, alongside more traditional face to face approaches, blending them instead of replacing them.

“It’s an option for the future. I’d like to see aspects of the way we have been delivering some interventions stay,” Claire said.

“Sitting on the all-Wales forum, we are very conscious – as is the Michael Palin Centre – of the need to have an evidence base supporting telehealth in the success of therapy outcomes.”

Ann Milligan, Swansea Bay’s Head of Paediatric Speech and Language Therapy, said: “We are delighted Claire has revolutionised this service during a very difficult time for children and young people who stammer.

“Utilising telehealth has provided an excellent platform for continuing intervention and reducing the anxieties of the young people and their families.”

Anyone with concerns about stammering, can contact the department via email: SBU.childrensspeechtherapy@wales.nhs.uk