Pioneering work in Swansea means a complex skin cancer procedure can continue while patients are awake - for the first time anywhere in the world.

Sentinel lymph node biopsies can potentially save the lives of people with melanoma by detecting at an early stage whether the cancer has spread.

Until now they have been carried out under general anaesthetic. But the Covid-19 outbreak has created significant risks with this, leading to the service having to be suspended.

So Morriston Hospital’s plastic surgery and anaesthetics teams have developed a technique using a series of specially-developed nerve blocks, which allows these biopsies to continue.

Consultant plastic surgeon Jonathan Cubitt said: “Covid-19 has had a huge impact on the way we function as a hospital and the ability we have to deliver cancer care.

“Melanoma is a skin cancer that can be life-threatening.

“A sentinel lymph node biopsy is a surgical technique that allows early detection of melanoma spread and therefore access to oncological treatment, if needed.

“This will significantly reduce the risk of melanoma recurrence and therefore improve disease-free survival.”

Cancer can spread to lymph nodes, which can usually be found in the neck, groin and armpit.

Any cancer cells that become loose may move through the lymphatic system to the sentinel node – the first node the lymphatic fluid and therefore the cancer drains into – where it becomes trapped and starts growing.

Eventually it will have grown enough to be felt by the doctor or patient.

But in the early stages, the lymph nodes cannot be felt, making it impossible to tell whether the cancer has spread.

If the sentinel node biopsy reveals it has, patients can then be referred for additional treatment.

So how does it work?

The day before the biopsy, a small amount of radioactive tracer is injected near the primary site of the cancer. A scanner follows its progress through the lymphatic system to identify the sentinel node or nodes.

These are surgically removed the next day and examined to see whether there has been any spread of the cancer cells.

The surgery has been carried out in Swansea Bay for four years. It was offered to all South Wales patients until the outbreak started. 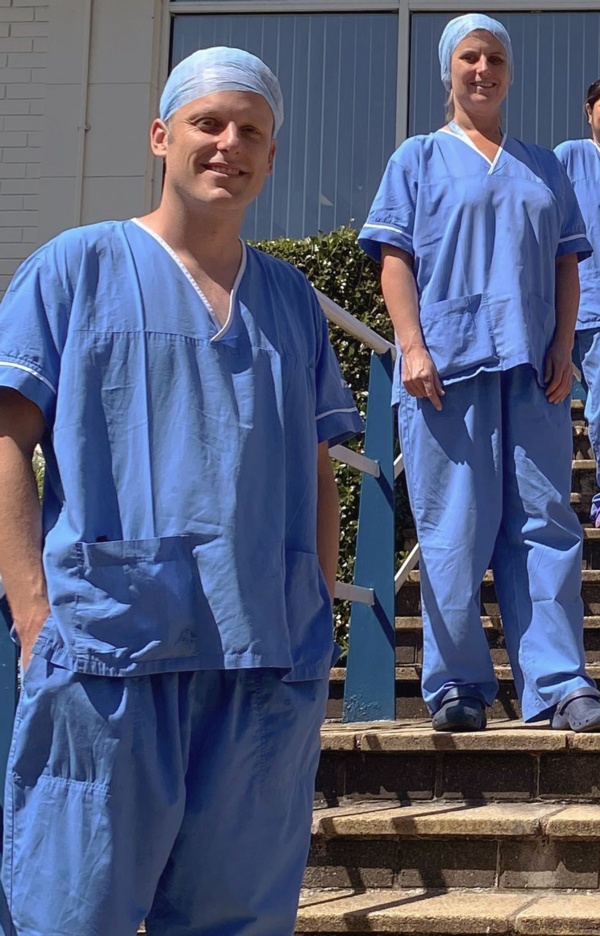 However, with restrictions likely to remain for the foreseeable future and with melanoma patients still requiring timely care, an alternative solution had to be found.

Consultant anaesthetists Christian Egeler and Ceri Beynon, along with consultant plastic surgeons Mr Cubitt, Sarah Hemington-Gorse and Sophie Pope-Jones, developed a series of local anaesthetic blocks that would allow the surgery to continue.

A multidisciplinary team manages the patients, from the GPs who refer them, the dermatologists who make the diagnosis, the nuclear physicists in Singleton who map the sentinel nodes and the anaesthetists and plastic surgeons who carry out the surgery.

Meanwhile, Sancta Maria Hospital in Swansea has provided a Covid-clean operating site where the melanoma surgery can be carried out.

Mr Cubitt said: “If it hadn’t been for Covid we would have carried on using general anaesthetic but because of the restrictions we have been forced to think outside the box.

“This technique isn’t done anywhere else in the world. We are lucky we have the expertise with our anaesthetists.

“Even after Covid-19, I don’t think we will go back to just using general anaesthetic.

“We would give the patient the option, but with the knowledge that it’s always safer to avoid general anaesthetic.

“We’ve done nine to date and by the end of the week we should have done the tenth. We will be publishing on this so we can share it with our colleagues around the UK.”

One of the first patients to benefit is 37-year-old Stephen Pearce from Llanelli, who developed skin cancer on his arm.

Mr Pearce, who is currently awaiting his biopsy results, said the nerve block procedure was explained to him over the phone before surgery.

“On the day, the anaesthetist came in to explain in more detail, and that it would stop any feeling in my right arm and right side of body.

“I had two injections. One was in the shoulder which I could feel travelling down the arm from my shoulder to my fingertips, slowly feeling it numbing.

“The other was in my chest to make sure the armpit was numb and could be operated on.

“This was 15 minutes before the procedure itself, which lasted around half an hour.

“The feeling came back within an hour and by the time I was home I had regained control of my arm.”