Six-year-old superstar Penny raises over £1,000 in support of the NHS

If anyone deserves a lap of honour then it’s Penny Seager-Davies who is only six years old but whose little legs have gone a very long way. 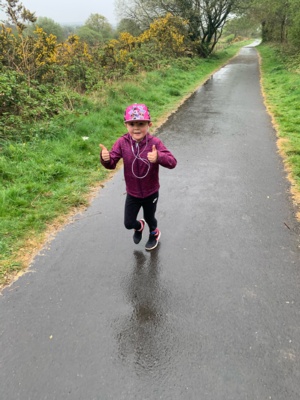 Penny lives in Grovesend with parents Jason and Lisa Seager-Davies and three-year-old brother Clark, who joined her for part of the garden run.

Dad Jason explained she was a very active little girl who, before the lockdown, enjoyed jujitsu, Thai boxing and swimming, and was also a member of the Rainbow Guides.

“She is a very busy child. A few weeks ago I did a 5k run and Penny came with me, finishing it in 37 minutes,” said Jason.

“A week later she came up with the idea of doing 100 laps of our garden.

“I think she was inspired by Captain Tom. There wasn’t any prompting from us, this was something that came from within herself.”

Penny is also supporting the NHS with her own garden marathon (right).

Originally her parents shared details with family and friends as a way of keeping in touch during the lockdown. 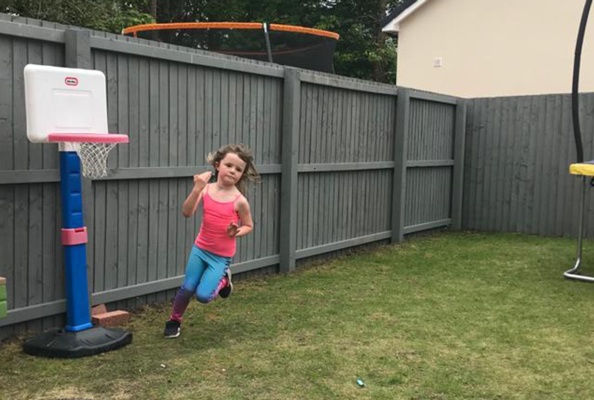 They offered to donate, so a JustGiving page was set up to raise funds for the Support NHS Wales campaign, run by Swansea Bay Health Charity.

This will benefit patients and staff across Wales, providing items over and above what the NHS is providing.

To date, Penny has raised £1,040 for the appeal. “She was overjoyed that people wanted to give money to something important,” said Jason.

“She has also shown a lot of interest in finding out more about key workers during the lockdown.

“She is only six so we haven’t really told her too much about the pandemic.

“But we have friends working on the frontline in the NHS and she is very interested in it, and that’s why she was determined to raise money for the NHS. She is a really giving child.”

Penny, who wants to be a key worker when she is older, said she wanted to thank everyone who donated. “It’s a lot of money, more than I ever expected to raise. It’s amazing.”