Sight-saving procedure available to children in a first for Wales

Children across Swansea Bay are the first in Wales to be offered sight-saving treatment which will prevent them from needing a transplant.

Youngsters with keratoconus, where the cornea bulges into a cone shape and makes it difficult to see, can now undergo a procedure to stabilise their eye.

Corneal cross-linking is the only treatment that can stop progressive keratoconus from getting worse.

Previously it was only available to adults but is now being offered to children and young people in the Swansea Bay and Hywel Dda health board areas.

The single-visit procedure involves using a machine that focuses UV rays onto the cornea, along with eye drop medication. These combine to make chemical bonds on the cornea to strengthen it and prevent any further misshaping.

The only option for children had been to have a corneal transplant or wait until they reached the age of 18, by which time many would have lost the vision in one eye. 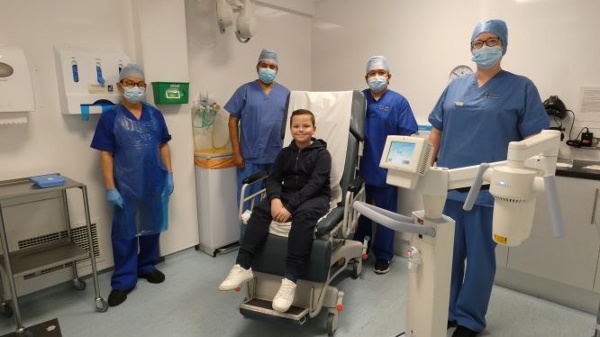 Ophthalmology consultant Mr Mario Saldanha, based at Singleton Hospital, in Swansea, said: “We received the machine in 2017 but have only been able to do the treatment for adults.

“The real need was in paediatric age groups where the disease can be quite aggressive and by the time they reach the age of 18 they will almost definitely lose vision in one eye completely.

“The only option before this treatment for these cases used to be a corneal transplant.

“For a young individual that is a major operation which has implications for completing their education, becoming independent, getting job prospects and further moving ahead in life.”

Earlier this year, Health Technology Wales, a Welsh Government funded organisation which works to improve health technology, approved the treatment and made it available to children as young as 11.

Charlie Wiltshire, aged 11, was one of the first patients to undergo the corneal cross-linking procedure at Morriston Hospital, in Swansea, after his eyesight suddenly deteriorated during the pandemic.

His mum, Sarah Wiltshire, said Charlie had been complaining his vision had become blurry and he struggled to use the laptop during home-schooling.

“I thought he was pulling my leg because he could play his Xbox but couldn’t see his laptop for the home-schooling so there was a bit of back and forth for a while,” said Sarah, who lives in Neath.

“Due to lockdown we couldn’t get his eyes tested until one day he told me how bad it was so we managed to book an eye test.

“They told us that he had gone legally blind in his left eye since his last eye test. It had gone very quickly.

“It went from having no glasses to him needing such a strong prescription that it had to happen over three stages. He couldn’t have his glasses straight away because it had become very bad, very quickly.”

After being referred to the ophthalmology department at Singleton Hospital, Sarah was told that Charlie, whose dad has the same condition, would need to undergo orneal cross-linking.

She added: “When we came for our first appointment with Mr Saldanha I realised how bad Charlie’s eyes were as he couldn’t even see the top line of letters on the board.

“We were a lot more informed on our first appointment and we were told there and then that he would need the surgery.

“We only had two appointments before the surgery itself. It was very quick.” 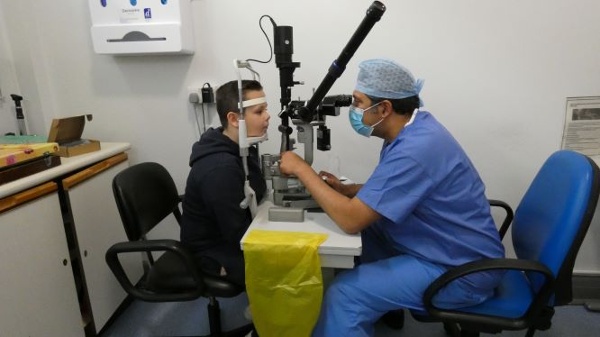 Since the treatment on both of his eyes, Charlie can now read several more lines on the eye chart and no longer suffers with headaches or blurred vision.

Sarah added: “There’s nothing scarier than being told your child has gone blind in one eye.

“It was a massive relief. It was nerve-racking when he had it done because when he woke up he couldn’t see, which you expect because he had both of his eyes done.

“Even then we were reassured constantly by the doctors, nurses and surgeons.

“We are really grateful and it was amazing from start to finish. We felt prioritised straight away because clearly it was needed.”

Brooklyn Sadler is another young patient to have benefited from the corneal cross-linking treatment.

The 14-year-old, from Port Talbot, had started to keep her left eye closed after developing keratoconus but her vision has noticeably improved following the treatment.

Her mum, Julie Thomas, said: “She’s always had eye conditions and last year she was told she had the start of keratoconus, which I have got.

“Her right eye was bad enough that she couldn’t have any treatment for it so it was very important to rush and treat her left eye to protect it from getting any worse.

“She had cross-linking treatment and it saved her sight so we are very happy.

“She was keeping her left eye closed but now she’s opening it and with the condition she always wanted to scratch her eyes but that’s gone now too.

“On the vision chart she can see and read a lot more. She’s smiling again whereas before she was very upset because her eyesight had deteriorated.”

Mr Saldanha explained that three hubs offering corneal cross-linking are planned for the future in north, south-east and south-west Wales so that the treatment can become more accessible.

He added: “This treatment hadn’t been approved in Wales and there were many children and young adults who were losing their vision because this sight-saving treatment wasn’t available.

“Before this, the only form of treatment used to be in the community with contact lenses and, because not every child is happy handling a contact lens, quite a lot of them adapted to living with poor vision.

“This is a one-time treatment that aims to stabilise the cornea and improve their vision so each patient can get better glasses or contact lenses so that their vision ends up being a lot better.

“This treatment is completely nurse-led and delivered so it doesn’t actually cause an extra strain on hospital services.

“It’s a fantastic development that we can provide this service to the population of Swansea, Neath Port Talbot and neighbouring Hywel Dda University Health Board patients."