A keen runner inspired by her best friend’s recovery from a car accident has raised nearly £2,500 to help the rehabilitation of brain injury patients.

Aimee Anderson completed a half marathon to support the specialist Swansea Bay NHS service after witnessing how it helped her friend Harriet Keogh recover from serious injuries.

Harriet suffered two brain haemorrhages, broke eight ribs and her collarbone, along with internal bleeding in her liver and lung following the accident on the M4 just outside Port Talbot in December 2021.

The extent of the injuries means she still cannot drive or work, but she is making big strides in her rehabilitation thanks to the care and treatment from the Community Brain Injury Service at Morriston Hospital.

The service works with patients aged 18 and over who have traumatic brain injuries and helps them reintegrate into the community. The service supports their return to work, or taking part in other activities.

It includes a multidisciplinary team including speech and language therapy, occupational therapy, clinical psychology, a rehabilitation coach and a music therapist.

Harriet’s traumatic experience inspired her best friend Aimee to put in the hard yards and complete the Cardiff Half-Marathon while raising money for the service.

After quickly soaring past her initial target of £1,500, Aimee raised £2,087 with Gift Aid contributions taking her tally to just under £2,500.

The money will now be used for the rehabilitation of traumatic brain injury patients through organised activities.

It is a service which has been a pivotal part of Harriet’s recovery, and Aimee has been at her friend’s side throughout. 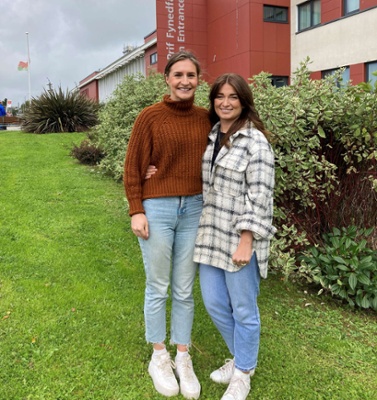 Aimee, 31, said: “Four of us decided to run the Cardiff Half-Marathon and raise money for the services that supported Harriet in her recovery.

“Three of our group ran for Headway, who are a UK-wide charity, while I ran for the Community Brain Injury Service at Morriston.

“After seeing how much they’ve supported Harriet, and continue to do so, we wanted to acknowledge how great these wonderful services have been.

“When it’s close to your heart, it gives you even more of a reason to do something like this.

“You don’t realise how amazing these services are until you or a loved one really needs it.

“And Harriet is definitely far better off for attending the service. She’s come on leaps and bounds since the accident.”

For Harriet, originally from Cardiff but now living in Swansea, the accident has had a big effect on her life over the past 11 months.

She now has a hearing deficiency and continues to be treated by the audiology team at Singleton Hospital.

But the support received in her regular sessions with the Community Brain Injury Service have proved crucial in her recovery.

Harriet, 30, said: “I was taken to hospital in Cardiff after the accident, and after eight nights I was sent home.

“My partner would take me out once a day for a walk on the beach but I’d only manage a few metres. I couldn’t move much as I was in a lot of pain.

“I was on a lot of painkillers and I noticed I was reacting to things differently. Once I came off the painkillers I thought that would change, but it didn’t.

“I had a MRI in January in Morriston, and when that was reviewed a month later we hadn’t realised the scale of the injury until then.

“I had to allow my broken ribs to heal, but I realised my brain was a bit more damaged.

“I then spoke to (Consultant of Rehabilitation Medicine) Dr David Abankwa in Neath Port Talbot Hospital, and he explained the problems I was having was due to the brain injury rather than the painkillers.

“Then I started attending the Community Brain Injury Service, which really was a big step forward for me.” 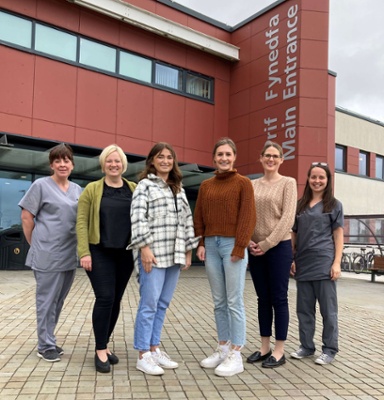 The service offers a range of neurorehabilitation support for patients, which can either be one-to-one or as part of a group.

It includes an upcycling group, which sees patients make new and useful items out of old, unused items, that challenges their practical skills in a bid to build confidence and independence.

It allows patients and staff to see what their strengths are and what areas they may need support with. They also benefit from the social element and camaraderie that comes with working together and connecting with others.

Harriet said: “I was very driven, independent and capable before the accident, and I’m not like that as much now and I find that very hard. But the upcycling group has helped – I’m restoring a chair at the moment!

“In the service, they say it’s an invisible injury. No-one can see that you’ve had a brain injury.

“I’m very aware when there’s something I can’t do now that I could before.

“The brain injury service is great. They help you restore your independence. Even though I struggle with that now, doing certain things with the service is a step forward.

“The service gave me the tools to make it a little bit easier. They taught me breathing techniques and being kind to myself, which I’ve found very helpful.”

While she concedes she may never make a full recovery, having the service available to her is already proving a psychological boost.

“I will be discharged from it at some point, but even then I can go back for help with certain things. It’s good to know they’re here for me forever.

“I know the NHS is amazing, but until you really need it you don’t realise just how incredible it is.

“The support and care I’ve received from the NHS is absolutely phenomenal. I can’t thank them enough for what they’ve done and continue to do for me.”

Harriet and Aimee recently met members of the Community Brain Injury Service team at Morriston to hand over their donation. 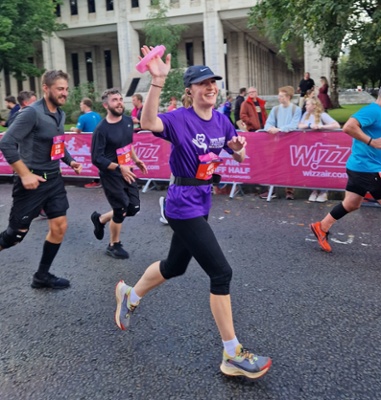 Alex Hamill, clinical psychologist, said: “We are really thankful to Harriet and Aimee for the generous donation.

“The money donated will now go towards helping our patients in the same way they’ve benefited Harriet.

“These funds will enable us to continue to run our community-based rehab groups, which will make a big difference for our patients.

“We’ve worked a lot in the past with third sector organisations like Surfability UK in Caswell Bay and Down to Earth.

“It allows patients to be out in the community trying things to aid their rehabilitation, rather than just being seen in a hospital setting, and they’ve proven to be very beneficial in their recovery.

“The feedback we get from the groups is that the activities held outside of the hospital are incredibly helpful. It provides an opportunity to reintegrate in the community and connect with other people who have sustained a brain injury.”

She added: “As a team, it has been lovely to see the improvements and positive progress Harriet has made in the last several months.

“We are incredibly grateful for Harriet and Aimee’s fundraising efforts for the service. It will help our patients so much.”