Main pic caption: Rosemary's face after the accident compared to how it is today

A cyclist involved in a horror smash with a pick-up truck has praised the team that put her face back together.

Rosemary Collins’ sunglasses were “mashed” into her face during the collision leaving her looking “like a horror show”.

She feared she would never look the same again.

But thanks to experts at Swansea’s Morriston Hospital the university researcher has made a remarkable recovery.

She and her wife Sara McAleese are so grateful they posted before and after pictures on social media along with a message thanking the hospital team.

“I just thought ‘Oh, what a horror show’,” said Rosemary, thinking back to the first time she saw her injuries.

“I hoped somebody would be able to stitch it up and do a reasonable job, but they did a way more than reasonable job. They are so skilful.”

Rosemary and Sara took to Twitter to publicly thank staff on the first anniversary of the accident. 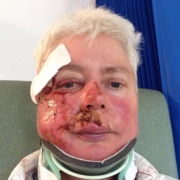 Caption: Rosemary suffered trauma to her forehead and lip

Fifty-eight-year-old Rosemary had just left the house and was cycling to Aberystwyth University, where she works as a researcher in plant breeding, when her front tyre suffered a blow out.

She said: “I went around the corner and there was a line of stationary traffic. I just wasn’t able to stop and I slammed into the back of a pick-up truck.

“I tried to swerve, but I couldn’t control the bike and I glanced off the truck and got catapulted onto the other side of the road on my head.”

As well as the injury caused by the sunglasses Rosemary, who lives just outside Aberystwyth, also broke a tooth, which perforated her upper lip leaving her with two facial traumas.

Bleeding badly and suffering from concussion, she was rushed to Bronglais Hospital by ambulance. However she was yet to see the extent of her injuries.

“Sara kept saying, ‘Oh my God Rosie, your face!’ I think she was trying to break me in gently.”

A CT scan at Bronglais revealed none of her facial bones were broken, but she was referred to the Welsh Centre for Burns and Plastic Surgery at Morriston Hospital, which provides a regional service. On arrival they carried out another CT scan on Rosemary, which revealed she also had a broken bone in her neck.

“It wasn’t in a bad place thankfully,” said Rosemary.

“It could have been a whole lot worse.

“They operated on my face the next day. I don’t know how many stitches were put in. I also had lacerations all over my legs and shoulders and they cleaned it up and put my face back together.

“The surgeon explained that around your temple there’s so many blood vessels and nerves that control your face, so they have to be careful.

“You can barely see any scarring. There’s a very faint line where the two big injuries were, but other than that it’s barely visible. It way exceeded my expectations.

“I would say my face is 99% the same as it was before, which is just amazing. I think it’s incredible. I’m in awe of their skill.”

Professor Iain Whitaker, Honorary Consultant Plastic Surgeon, was the consultant in charge on the day Rosemary was admitted.

He said: “I am delighted with the results of Rosemary’s surgery, and even more pleased that she is so happy with the care she received from the team.

“It’s a credit to the whole team providing her care from the surgeon, to the nurses and the administrative support staff. We always strive for a culture of excellence in plastic surgery at Morriston Hospital.

"We are doing a lot of research currently on the impacts on patients with facial scars in Wales and trying to improve how we deal with these injuries."