A new outpatient service for people with neurological conditions will more than halve the time they need to spend in hospital.

Swansea’s Morriston Hospital is the first centre in Wales, and only the second in the UK, to offer the service.

It will help patients with neurological conditions who may have harmful antibodies within their blood that are attacking their body.

Peripheral plasma exchange involves patients with conditions such as myasthenia gravis (which causes muscle weakness) or multiple sclerosis, having their blood filtered through a machine over a two to three hour period, across three consecutive days.

During the procedure, blood is taken out of the patient before unhealthy plasma is removed and replaced with healthy fluid.

Plasma is the largest component of blood, making up around 55 per cent of its blood volume.

By taking away the unhealthy plasma, the antibodies are removed and the patient’s symptoms may improve. 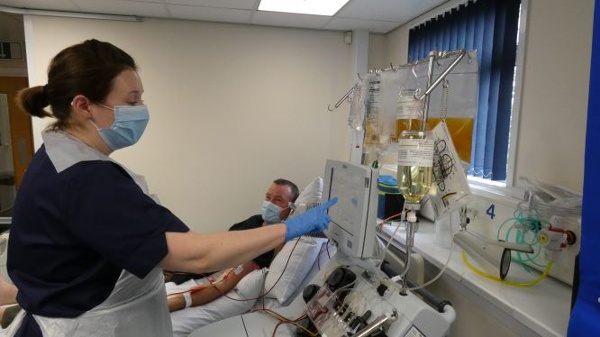 Pictured: Alexandra Strong with Gareth Perkins, who was the first person to benefit from the new service

Until now, plasma exchange has been performed as an inpatient procedure in the renal unit at Morriston Hospital and involved a stay of up to two weeks.

Patients would receive the exchange through a central line which was connected to a renal dialysis machine.

“It was quite an invasive procedure and took quite a lot of inpatient time and space,” Dr Gillian Ingram, consultant neurologist, said.

“It was also dependent on the renal unit having availability between their dialysis patients.

“It came with risks and involved a hospital stay, normally for about two weeks, with patients having five exchanges over that period.”

Instead, a new Spectra Optia Apheresis machine allows the exchange to be carried out through two venous cannulas in the patient’s arms.

Based at the Jill Rowe Neurology Ambulatory Unit in Morriston Hospital, it is only the second service in the UK to use the machine for peripheral plasma exchange (meaning it is delivered through each arm) in neurological diseases.

Patients receiving the treatment are able to go home between each of their three sessions.

Dr Ingram added: “Apheresis or plasma exchange is a well -established treatment for neurological conditions. However, Swansea Bay is the second neurology centre in the UK to use this new technology.

“It’s nice and quick and is much more convenient for the patient. It also saves a prolonged inpatient stay.

“The previous method of plasma exchange could cause blood pressure fluctuations that can be difficult for patients to tolerate, so this is much easier for them.

“We are now able to safely offer this treatment for a lot more patients with a wider range of conditions, including those with some chronic neurological conditions.

“Due to safety risks this would previously be reserved for a few patients who did not respond to other treatments.

“It’s really nice to keep it in-house because we can monitor our patients a lot closer. It was very difficult to do when we were outsourcing the service.”

Gareth Perkins, from Swansea, was the first person to receive the treatment as part of the new outpatient service at the unit.

The 52-year-old was diagnosed with chronic inflammatory demyelinating polyneuropathy (CIDP), a rare type of auto-immune disorder where the body attacks its own tissues, six years ago.

The  most common symptoms include weakness, numbness and tingling in the legs, arms, fingers and hands, while others include pain, fatigue and balance issues.

“It initially affected my feet but it now mainly affects my legs, arms and hands,” Mr Perkins, pictured, said.

“I had been injecting myself with immunoglobulins into my stomach every other day but over the last few months the disorder has started taking over.

“This is the first time I’ve had to come into hospital but the experience has been great.

“I’ve come in for two to three hours for treatment over the course of three days.

“I’m hoping it will reduce the decline I’ve been experiencing because until now my steroids had to be increased to try and stop it.”

It is hoped in the future another machine can be introduced at Morriston Hospital which could be used to treat more inpatients.

Alexandra Strong, manager at the Jill Rowe Neurology Ambulatory Unit, said: “The staff here are always open to embracing new treatments, new medical device technology and to learn new skills that will benefit our patients and improve the quality of their lives.

“They have been eager to learn and have worked really hard to successfully complete both online and practical training for plasma exchange.

“I am very proud of how they have embraced this new service and adapted very well to this advance therapeutic apheresis system.”