The father of a Swansea schoolboy has raised money for Morriston Hospital in memory of his much-loved son. 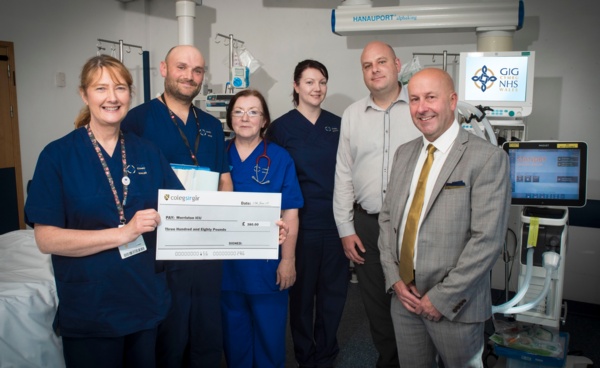 Thomas David Jones was treated initially at the Emergency Department at Morriston Hospital, after being taken ill suddenly in 2017. He was then transferred to University Hospital of Wales, Cardiff, for treatment but unfortunately he later passed away.

The 17-year-old was described by his father as being “a kind, caring and sophisticated young man with an infectious personality”.

A pupil at Ysgol Gyfun Gymraeg Bryntawe, Thomas (pictured below) had been studying for his A levels, he excelled at history and English, in preparation for university. He also liked music and played the drums in a band with some of his friends.

His dad, Simon Jones, has now donated a cheque for £380 to the intensive therapy unit at Morriston Hospital, in memory of his son.

The money was raised by Mr Jones, together with his work colleagues at the Business Development department at Coleg Sir Gar, through completing a muddy assault course in March of this year.

Mr Jones said: “Thomas was a kind, caring and sophisticated young man with an infectious personality. He touched the lives of so many in his short life and was loved by everyone who had the privilege of being in his company."

Bethan James, Practice Development Nurse, at the intensive therapy unit, said: “We are very grateful to Mr Jones and his colleagues for the donation which will be used to benefit future patients in intensive care.”