When you have two model staff working on the same hospital team you could say it’s a small world – and you’d be right in more ways than one.

An intricate Lego model has been created to help children needing an MRI scan feel more at ease ahead of what can be a scary experience.

Main photo above: Mari Harris and Barry Spedding with their Lego selves in the MRI model

Not only does the model feature an accurate rendering of an MRI machine and a patient, but also two real-life members of Morriston Hospital staff.

It’s all thanks to the model-making skills of Lego enthusiast Chris Mardon, from Loughor, who created it after sourcing hundreds of individual pieces as well as online instructions for putting them together.

The model has now been presented to staff on the children’s ward. Play coordinator Lisa Morgan explained: “An MRI scan can be a scary thing for children, especially if they’re having it while they are awake.

“We will use the model to show them the machine so they know what it looks like. We can play some sounds from YouTube so they have a sense of what it will sound like as well. 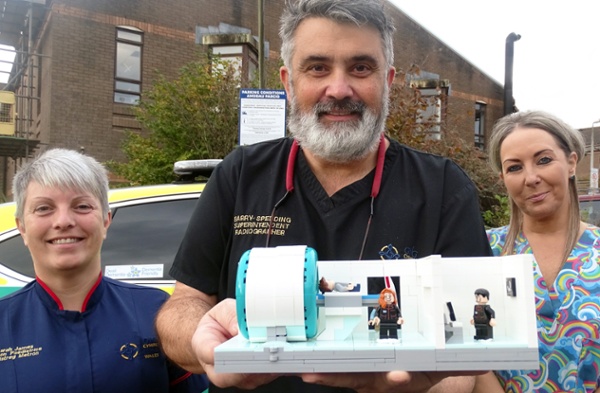 “Even if they will be having a general anaesthetic, they still like to know what they’re having done and what the machine looks like, just so they can understand more about it.”

It all came about after superintendent radiographer Barry Spedding spotted an article in Rad, a specialist clinical publication.

“Lego had done research showing that the models helped children prepare for an MRI scan as it’s normally quite an unsettling experience for them,” said Barry.

“There were 600 models available but unfortunately they had all been given out worldwide. So we were a little bit disappointed.

“But lo and behold, after a chance conversation, it turned out that Chris was prepared to source and build the model for us.”

Like millions worldwide, Chris, aged 40, used to play with Lego when he was a youngster.

“I picked it up again a couple of years ago when I found a set I liked, a DeLorean from Back to the Future,” he said. “I then started collecting different sets. I find it helps with my anxiety – it’s very therapeutic.”

Chris also makes custom picture frames of characters like Spider-Man, with a picture of the character in the frame and a Lego version attached.

He got involved with the MRI model as his mother, Bethan, works in radiology and happened to mention the article Barry had spotted. 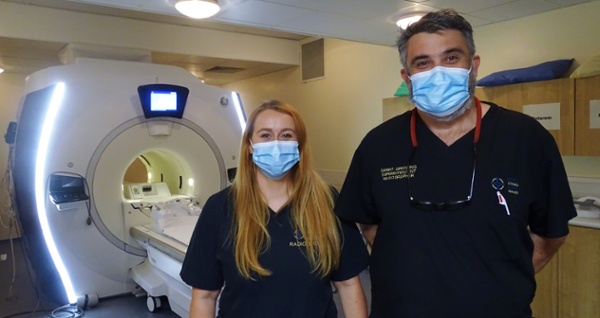 When Chris found all the original Lego sets had gone, he offered to make one from scratch. After an internet search he found PDF instructions, then sourced all the components on the Lego website.

“Ordering the parts didn’t take long – I did that in an evening – though some of them took a few weeks to arrive. Putting it together took maybe three hours one afternoon,” he said.

“I’m very pleased with it. It came out a lot more accurately than I thought it would, working off a PDF.

“It’s the most ambitious thing I’ve done and, because of who I was doing it for, the children in the hospital, I wanted to get it right.

“I read that having an MRI can make them anxious. I have two young nieces and I thought that, if it was them, I’d want them to feel at ease.”

As well as an intricately detailed MRI machine, the set features a young patient having a scan. It also includes tiny Lego versions of Barry and his diagnostic radiographer colleague, Mari Harris.

And Barry is more than a little happy with the finished model. “It’s absolutely perfect,” he said. “When you compare what Chris has made with the photograph of the original in Rad, it’s spot on.”