How a Swansea GP found himself on Africa's Covid-19 frontline

“I remember when the first Covid patient came into the hospital.  A lady in her 50’s.

“I remember thinking she doesn’t look much older than me.  She was fully conscious.  She knew she was dying.

“I remember turning up the oxygen, thinking there is nothing I can do, nobody I can call, no back up here.

“I distinctly remember thinking – is this it?

“Is this how we’re all going to die?  Is this what’s going to happen to all of us?”

Now he has found himself fighting Covid-19 in Liberia, effectively running one of the few hospitals in the country with an isolation ward and a plentiful supply of oxygen.

He initially arrived in Monrovia, Liberia’s capital city, to set up a large paediatric programme, mainly working with mal-nourished children.  It’s a husband and wife team, Mikey’s wife Dr Bethany Bryant is a paediatric doctor at Morriston Hospital when they are working in Wales.

Mikey felt he and his team were making inroads into improving the health care of youngsters in Liberia, then in April of this year – Covid-19 hit.

The money for the isolation ward, the oxygen, antibiotics and staff has been funded by Swansea Bay Health Charity’s Africa Health Links Fund and Welsh Government’s Wales and Africa grants scheme.  Without those revenue streams there would have been no way of treating patients with Covid-19 at the ELWA Hospital where Mikey works. 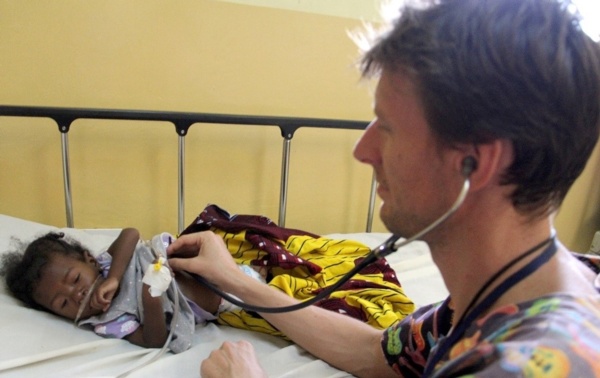 (Left:  Dr Mikey Bryant with a young patient in his paediatric clinic)

He’s been in Liberia since January 2019, and has spent a fair bit of his career working between Wales and Africa.

Not only has Wales played its part in funding Mikey and his team’s work out in Liberia, Mikey also drew on the experience of his Welsh contacts in the early days of the pandemic. He modelled a lot of how he wanted his hospital to deal with Covid-19 on how colleagues in Swansea Bay had reacted.

He said: “I still do telephone medicine for the Swansea Bay GP out-of-hours service.

“I do about 15 hours a week from here in Liberia.  I would be doing my shift but then also calling other Swansea GPs saying, what are you doing, what does Morriston look like, what’s the set up there?

“Without that link to Swansea Bay, I think we would have really struggled.”

From originally arriving in Liberia as Swansea Bay’s paediatric lead, to being asked to become the hospital’s medical director and then as the pandemic struck taking on a third role as Covid-19 response lead, you have to ask what drive’s Mikey to that extent?

He said: “I actually spent most of my childhood in Senegal.  I’ve always had an interest in Africa.

“I remember when I was a child my brother got really, really sick.

“He was so unwell, he almost died.  Thankfully he recovered.

“I remember at the time, with a muddled teenage brain thinking, oh this is great my brother’s got this care, but wouldn’t it be great if this level of care was extended out to other children across the country.

And that has been my drive, to mostly help in paediatrics.” 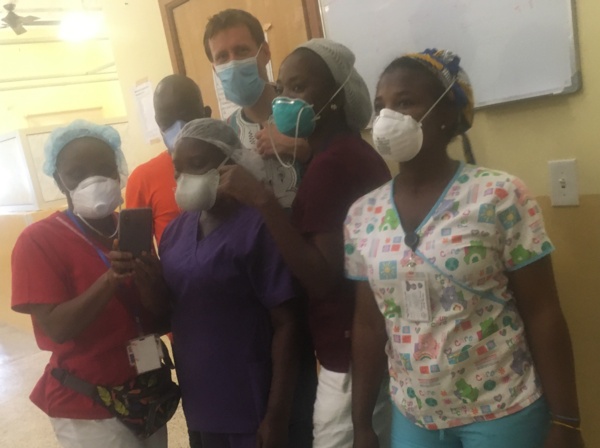 (Left:  Dr Mikey Bryant with his medical team on the Covid Isolation ward)

Africa, and in particular Liberia is, unfortunately, no stranger to an outbreak of a deadly disease.

Ebola swept the country in 2014 and lasted for two years.

Mikey remembers when those first Covid-19 patients came through his hospital doors at the end of March this year.  He said: “At first everybody seemed to think it was going to be Ebola all over again and everybody was in a panic.

Liberia’s experience with Ebola has helped the country’s response to Covid-19.

Mikey said: “People almost had a kind of muscle memory to many of the terms used in this pandemic.

“You didn’t have to explain what contact tracing is, what self-isolation is, everybody knows what those terms mean.”

Mikey thinks the Liberian Government has been strong in its response to the pandemic.  He says the Ministry of Health has been clear in its directives, locking down certain areas and trying to test as many people as resources allow.

But he doesn’t think they’ll see a ‘peak’ like we have in other parts of the world, as it’s impossible to get an exact picture.  He said: “There is still a huge part of the population here who don’t go to hospital. They don’t engage with the health services at all.

“We have some sense of where we are, but we don’t really know the exact figures.

“I would say we have had more of a steady rise, rather than a peak.  Part of the reason for that is mobility is less here.

“People aren’t flying around the country, people stay in their areas more, transport is very limited.”

He also finds it difficult to envisage a time when Liberia will be able to declare itself free of Covid-19.  He said: “We’re still steadily rising in case numbers.  I think it will be here for some time.

“It’s very hard here to actually go for a zero case situation, as everything has consequences.

“If you say right, we’re going to have a total lockdown in the country, then most people here are living day by day, they’re living hand to mouth.

“Their whole survival might depend on them being able to sell some goods that they’ve made, on the street.

“If you lock everyone down and say right you can’t sell any more, then overnight that is people’s incomes just gone, just disappeared.

“That’s why when there have been times the capital has been locked down, we have experienced the consequences first hand.

“Breadwinners instantly lost the ability to feed their families and so we saw many people coming to this hospital suffering from malnutrition.” 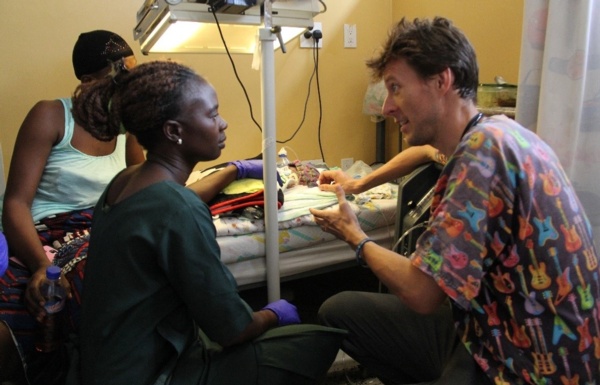 (Left:  Dr Mikey Bryant training some of his team)

Looking into the future, Mikey is still facing the challenge of dealing with the Covid-19 threat but also trying to keep other health services going.

He said: “The main goal of what we’re doing is to try and keep our hospital open for everything else.  Covid-19 is huge of course, but in a country like Liberia there are also so many things out there that are so dangerous.

“Malnutrition is a huge problem.  So is malaria.  Emergency childbirths are frequent.”

In an echo of what is happening here in Wales - as the NHS looks to bring services back online and encourage the public to ask for help when they need it - another challenge has been building people’s confidence to re-engage with the health system.

Mikey said: “When we had our first COVID deaths here at the hospital in April, the effect of that was huge.

“We had two completely quiet weeks with no-one here.

“Nobody wanted to go to a hospital, people were scared.  There was a perception if you got sick and went to hospital you would catch coronavirus.

Things have picked up, as confidence slowly built and families returned to take part in the malnutrition programme that is funded by Wales.

Mikey is planning to return home soon but before he leaves his aim is to leave a ‘Liberian-owned’ strategy in the fight against Covid-19 and make sure the malnutrition programme is well-established too, to continue helping the 600 malnourished children attending monthly.

He said: “In Liberia, I suspect long term coronavirus will probably be here longer than I will.  So it is so important to me that there is local ownership and engagement with the population to keep these programmes moving forward.”

Mikey is raising money for his work out in Liberia.  If you would like to donate you can through his JustGiving page: https://www.justgiving.com/fundraising/michael-bryant8