Grateful patient helps us pause to remember the fallen

When Gayle Lewis (pictured above with veteran Jon Bevan) sounded the Last Post outside Morriston Hospital on Armistice Day, she was not only honouring our war dead but giving thanks for the staff inside who have worked so tirelessly throughout the pandemic.

The 49-year-old from Pontarddulais has seen the current pressure on hospital staff first-hand, having undergone major surgery back in the summer, and wanted to pay tribute to their dedication and commitment towards helping others.

Gayle, who has multiple sclerosis, dislocated her ankle in April 2019, shortly after the start of the pandemic, but did not immediately seek help. 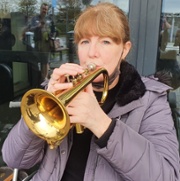 She said: “Because of the pandemic I foolishly didn’t go to hospital, or see a doctor, for seven days. Looking back I should have at least called 111 to ask for advice.

“When it started to get worse I eventually went to the emergency department and was told that it was infected.”

Unfortunately, despite an operation to rectify the problem, and subsequent rehabilitation, Gayle’s leg deteriorated.

She said: “It was never right and was only getting worse. I went back to ED at the end of August this year and I saw a consultant. He said that I could either learn to live with my limb, but there would be ongoing problems, or I could have my leg amputated halfway below the knee. It was my decision.

“It wasn’t an easy decision to make, but I had been living with my leg and it wasn’t right, and so I opted for the amputation. I made the right decision.

“I spent seven-and-a-half weeks in hospital and they looked after me brilliantly. All the staff were absolutely fantastic. It was a long time to be there and I saw patients come and go but the staff were fantastic with everyone. I could tell that they were under a lot of pressure, with the pandemic – it was crazy for them – but they coped with it all with smiles on their faces.

“I don’t understand people who say our hospitals weren’t open, they saw that I needed help and I was straight in and seen to.”

Gayle, who has been a member Penclawdd Brass Band, came up with the idea for her unique thank you after having sounded the Last Post during lockdown, last year.

She said: “Deborah Perry, who is the occupational therapist helping with my rehabilitation, encourages me to remain upbeat and so I wanted to do something to thank the hospital staff.

“I have always enjoyed music, I won the national eisteddfod when I was an under 19s soprano, and I played the last post on my doorstep, for my neighbours, last Remembrance Sunday. I thought it would be nice to play it again this year on behalf of the hospital.

“There are two reasons for playing, a personal one for myself to remember my great uncle, Gordon Richards, who was lost in the Second World War, along with all whose lives which were lost in wars, every single one of them.

“And it is also my way of thanking the wonderful staff who have not only helped me but worked so tirelessly throughout the pandemic.”

Gayle took part in a short ceremony, outside the main entrance to Morriston Hospital, along with SBUHB chaplains Shakirah Mannan and David Richards, to mark Armistice Day.

Swansea Bay University Health Board occupational therapist, Deborah Perry, said: “This is actually the first time Gayle has ventured outside her house since her operation and we are extremely grateful that she has chosen to come here today and help us mark Armistice Day.

“It is a very brave step on her behalf and I am so proud of her.”