Fighting the flu can be fun

There were cakes, drinks, fancy dress, balloon modelling and glitter tattoos - but this was no ordinary children’s party.

For those attending also received protection against a serious virus.

The two and three year olds invited to the celebration at Abertawe Medical Partnership in Swansea were given the nasal spray flu vaccine.

But it’s so quick and painless to administer – just one squirt up each nostril – it didn’t stop the fun.

“It was great to see so many children come in and have the flu vaccination,” said Dr Amrita Amin.

“The uptake has been great. I am really pleased.” 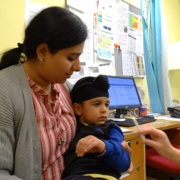 Anshveer Singh, two and a half, receives the flu nasal spray. He is pictured with his mum Amanjot Kaur.


GP surgeries across the health board area are inviting all parents of two and three year olds to bring their children in for a free vaccination.

Dr Amin said: “It is important because children mix with other children. They can pass on bugs to other children and that is how flu can spread quite easily.

“A child with a normal immunity can get quite ill (with flu) and they can be hospitalised sometimes.

“But other children who have issues with the lungs, heart or bowel or any major, significant disease can be quite ill and can be hospitalised for a serious amount of time.”

Neshad Ahmed brought her daughter Anyah, three, to the party at the surgery on St Helen’s Road. 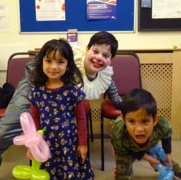 She said: “I have got four children and they all have the flu vaccine. Two of them have asthma.

“You hear lots of stories about young children falling seriously ill and I would rather prevent it.

“My older children used to have the injected vaccine, but now they have changed to a nasal spray and they don’t even feel it. It doesn’t cause any distress to them.”

The Fluenz nasal spray does contain live flu virus. However, it has been attenuated or weakened, so while it will prepare the body to fight off the flu, it will not cause children to develop the flu.

Dr Amin said: “The Fluenz nasal spray does not have any serious side effects. It’s a myth that the Fluenz vaccine gives the children flu.”

It is particularly important that children are vaccinated as they are 'super spreaders' of the flu.

As their hygiene is often not as good as adults, they are more likely to spread the illness among their families and the community.

Mousa Sawouda, who brought son Harris Irumba, three, to the party, said: “I don't want them to get sick because I have got five of them so if one catches the flu the rest are also going to be affected.

“I would rather have it than put their life at risk.”