Morriston Hospital’s Chris Brown has been made a Fellow of the Royal Pharmaceutical Society - one of the highest honours that can be bestowed upon the profession.

Chris is a consultant renal pharmacist and the professional lead for the Renal Medicines Service at Morriston.

This is a unique service that provides lifelong specialist treatments for thousands of people across South West Wales with kidney disease, including those who have had a kidney transplant or receive dialysis. 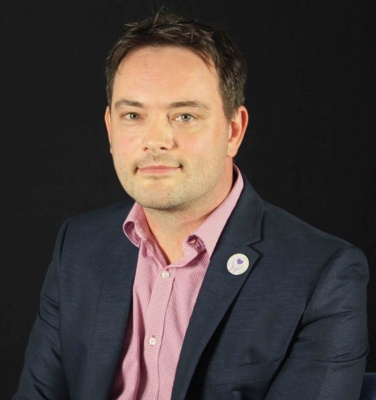 Chris (left) is also the national lead for Welsh Renal Network, which plans and monitors renal service across Wales. Additionally, he is an honorary senior clinical lecturer with Swansea University.

He said: “I am absolutely delighted and extremely honoured to have been awarded a fellowship.

“To know that my colleagues nominated me for this honour means so much to me.

“However, my contribution has only been made possible by the constant support and enthusiasm shown by not only my team but by the pharmacy profession as a whole across Wales.”

“His drive and leadership have transformed the way services are provided for people with kidney disease.

“His innovative models for kidney care have not just benefited the South West region but have been adopted and developed nationally in Wales.

“This has resulted in significant savings being made and reinvested into renal services.”

Chris is recognised as a champion for the pharmacy profession, enabling renal pharmacists to work at the top of their professional license.

He has pushed the boundaries of what pharmacists and pharmacy teams can do to deliver frontline patient care by creating a fresh approach to integrated team-based healthcare.

“Renal pharmacists in his team are the first in the UK to be able to authorise blood and blood component transfusion.

“Chris has had a clear vision for coordinated working with specialist nurses, dialysis staff and dieticians, for example.

“He has worked tirelessly with his consultant, nursing and pharmacy colleagues in renal to digitize renal services – a service recognised for its pace of digital innovation that is a frontrunner in Wales.”