A father with limited arm and hand movements after a brain injury is once more playing video games with his children thanks to the care and thoughtfulness of the Swansea Bay team who treated him, and the generosity of a local business.

Bilal Ahmed has limited movement in his left arm, hand and leg following an assault last year that left him unable to walk or complete simple everyday tasks.

Not only was the taxi driver unable to work, the injuries meant he couldn’t take part in the activity he loved doing most with his children – playing their computer console together.

Over the past year, Bilal has been treated by the Community Brain Injury Service at Morriston Hospital.

The service works with patients aged 18 and over who have traumatic brain injuries, helping them to live as full and independent life as possible. It has a multidisciplinary team including speech and language therapy, occupational therapy, clinical psychology, a rehabilitation coach and a music therapist.

But it is not only the treatment and support of the service Bilal has benefited from. The empathy of the team shone through as they went in search of an adapted Playstation 4 (PS4) controller that Bilal could use with his right hand.

Thanks to the team’s contacts at the Digital Accessibility Centre (DAC) – a Neath-based company who ensure digital projects are accessible for everyone – a device was located and purchased from the United Arab Emirates (UAE).

It meant Bilal could join his two sons and two daughters in playing their favourite game together – Cars.

Bilal, 40, said: “As a father, I loved playing the PS4 with my children. Playing Cars was one of our favourite things to do together, and it was really hard seeing my children’s faces when I wasn’t able to do that. But now we can play together and it makes us very happy.”

Occupational Therapist Helen Bankhead has been a pivotal figure in Bilal’s recovery via the brain injury service.

Having got to know Bilal through his rehabilitation, she quickly identified how missing out on playing the computer with his children was affecting him. 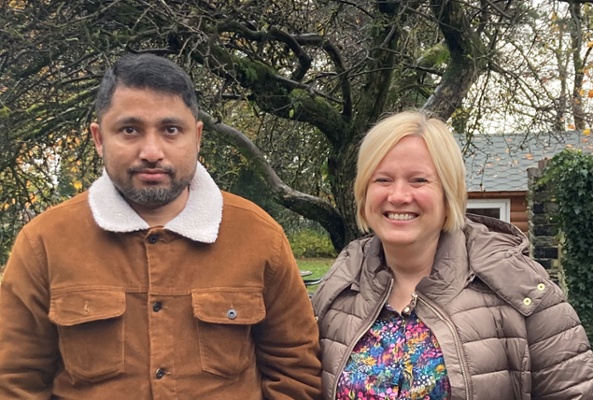 Helen said: “Neuro rehabilitation is the means to optimise cognitive, emotional and physical abilities following an injury. It is important to be holistic and to ensure that an individual’s wellbeing is taken into account.

“Prior to his injury Bilal regularly played the PS4 with his children. Being able to do this again is beneficial for both him and his family.”

"I got in touch with Cam Nicholl at the DAC to see if they could assist, and they found a PS4 controller that could be operated one-handed in the UAE. We were delighted when the DAC purchased it as an act of kindness despite not even knowing Bilal.

“It was shipped to the Brain Injury Service and Robert May – our Rehabilitation Coach - set up the controller ready for Bilal to use.”

Playing the PS4 with his children has made a big difference to Bilal’s happiness and has enhanced his quality of life.

As part of his rehab, he receives occupational therapy at his Swansea home to improve the function of his affected arm and takes part in various groups designed for patients to enable staff to assess what their strengths are and which areas they may need support with. 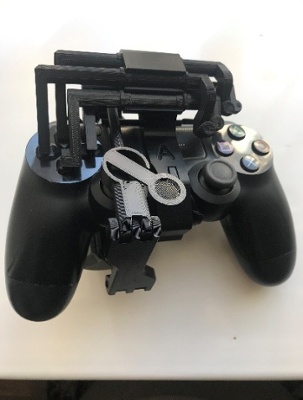 The groups also benefit patients as they share experiences of their injuries and creates camaraderie as they continue their recovery.

Now Bilal is able to walk without the aid of a stick, he has his sights set on having a driving assessment with the aim of driving a mobility car should he regain his licence in order to reclaim his independence.

PICTURED: The new controller allows Bilal to play the PS4 with his right hand.

Shilpi Begum, Bilal’s wife, says his progress has thanks to the treatment, kindness and support given to him by the service in Morriston.

Shilpi, 40, said: “The support we have received from the service has been incredible.

“If the service hadn’t helped us then we wouldn’t be at the stage we are right now.

“Bilal’s improvement physically has been notable, while his mentality has improved too.

“Taking part in groups such as the gardening club has really boosted his wellbeing.

“He has taken part in a music group while he made a few things in a woodwork club, which he wouldn’t have known how to do before the injury.

“He has made a toy box for one of our daughters and a birdhouse, which is in the garden.

“These are all things which are helping his recovery. Seeing Bilal and my children playing the computer again gives me so much joy. As a mother, it fills my heart seeing them smiling and laughing together again.

PICTURED: Bilal made this toy box for his daughter during a woodwork session organised via the brain injury service.

“These may seem small things to some, but you don’t realise how important it is when it is taken away.

“But thanks to Helen and her colleagues in the brain injury service, along with the very kind gesture from the DAC, our family can now enjoy these moments together.”

Helen added: “Bilal has been with our service for the past year. It is fantastic to see the steady progress he is making.

“We know that positive outcomes within neuro rehabilitation require a holistic approach which focuses on individuals’ strengths and providing opportunities to carry out meaningful activities on a daily basis. This is key to reintegrating individuals into their own lives.”