Every picture really does tell a story in hospitals, parks and playgrounds across Swansea Bay.

Health board speech and language therapists have worked with play development officers leaders from Swansea and Neath Port Talbot councils on a project to support children and adults with communication difficulties.

Symbol-based boards have been created to support communication and have been placed in council parks and playgrounds as well as health board hospitals and children’s centres.

Swansea Council initially approached the health board after being inspired by a similar initiative created by Hywel Dda University Health Board. Soon after that, Neath Port Talbot Council also came on board.

Main image above: Lisa Harrison (left) and Hannah Murtagh with one of the communication boards in Morriston Hospital

Hannah Murtagh, Swansea Bay’s paediatric clinical lead for speech and language therapy, said: “The aim is to improve inclusivity in those public spaces by creating a bilingual, symbol-based communication board.

“We wanted to work collaboratively to achieve this, and to mix our expertise together.

“The boards will allow children and adults with communication difficulties the opportunity to understand and express themselves within the space they are entering.”

They are intended for use by people of all ages – including those who do not have English as a first language. Each features selected symbols paired with a word, in both Welsh and English.

Different versions were created for use in health settings and in parks and playgrounds.

Those used in playgrounds, for example, include slide, swing, roundabout and seesaw. There are also verb symbols such as run, push, climb and jump, as well as pronouns such as I, you and they.

The boards also include written instructions for whoever is supporting the person who would use them.

As part of the content design, Swansea Bay highly specialist speech and language therapist Lisa Harrison conducted a survey of what words people thought would be most commonly used.

“From there it was a thematic analysis, looking at words that were more frequently suggested – but also additional words that would link those together as well,” Lisa said.

“We included pronouns, and the ability to negate, to say no to something. So we included a not, as well as emotions and some basic needs such as toilet, food and drink.

“They can be used by children and adults alike, but also by people whose first language is not English, who may be experiencing communication barriers.” 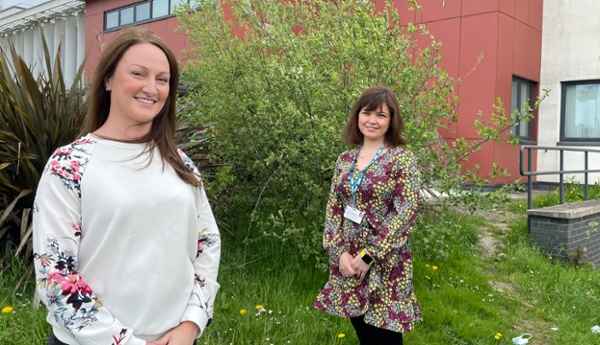 Hannah said having the opportunity to express yourself was a basic human right, and there were many ways of communicating.

“It could be spoken words, signs, gestures, pictures or written words.

“For someone who is unable to use spoken words, communicating their wants and needs can be really challenging, especially in a busy environment.

“When someone is not able to use the spoken word to communicate, they may use what we would call an augmentative and alternative communication method, or AAC.

“This can include pictures or symbols, which are frequently used to support people to express themselves when they might not otherwise be able to do so.

“People with a wide range of communication difficulties benefit from some method of AAC.

“It’s widely evidenced that providing visual support for those with communication difficulties is beneficial to them.

“The boards have been very popular in Hywel Dda, and we really want to replicate that in Swansea Bay.”

Neath Port Talbot Council has around 100 boards and will be placing them in all its parks, as well as offering them to town and community councils.

“With play opportunities having such an important role in the development of children and young people, it is important our parks are inclusive to those who have communication difficulties.

“We want to ensure all children and young people can express themselves and are able to enjoy the play opportunities available to them.”

Robert Francis-Davies, Swansea Council’s Cabinet Member for Investment, Regeneration and Tourism, said: “We are currently investing around £5m in upgrading and improving our play areas and facilities across Swansea and we want them to be accessible to and enjoyed by everyone.

“These boards will soon be placed in many parks and play areas and should be of assistance to anyone with communication difficulties.

“We are very grateful to the health board and their language therapy experts for their involvement and eagerness to collaborate on this project.”