Every parent knows how hard it is to get children to brush their teeth regularly, but turning it into a game they play at school seems to be doing the trick.

Dental health educators have been going into primary schools across Wales to teach pupils and their teachers the right way to brush their teeth. Once they know how to do it, they make it part of the school day.

Pupils at Cadle Primary School in Swansea are positively enthusiastic about the Designed to Smile scheme.

“We brush our teeth for two minutes after lunch every day,” said eight-year-old Lexi Absalom.

“We know how long two minutes is because we play a song which lasts two minutes called ‘brush your teeth every day’!” added nine-year-old Casey Leigh Croucher.

Children at the school know why it’s important to brush their teeth too.

Nine-year-old Josh Davies explained: “It’s a good thing because it causes cavities if you don’t brush your teeth.”

Cadle Primary School has been taking part in the Designed to Smile (D2S) programme for around ten years and the dental health educators are now familiar faces around the school as they also visit twice a year to paint a protective fluoride varnish on the children’s teeth.

The children don’t even seem to mind that! Eight-year-old Lexi Smythe said: “First I thought it would be really disgusting but it wasn’t that bad and it keeps our teeth clean and healthy. It tastes like banana and lemon.” 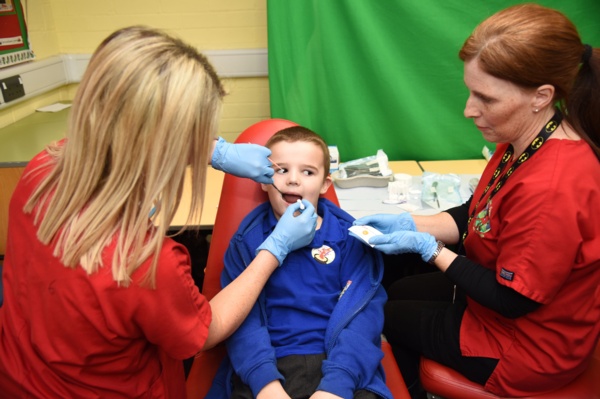 Six-year-old Caleb Smythe was up for it as well: “The fluoride was a bit sticky but I wouldn’t mind doing it again.”

Dental health educator Claire Hayes-Davies is a regular visitor to the school under the D2S programme. She said: “Children love tooth brushing and they nag the teachers if they don’t do it for any reason. Parents have trouble getting children to brush at home but they are happy to do it with their friends at school.

“As well as teaching the children how to brush their teeth, we also give them a free toothbrush and tooth paste three times a year to encourage them to brush at home.”

The combination of tooth brushing and fluoride varnish is helping to reduce rates of decay in children’s teeth. Currently, one in three five-year-old children in Wales has dental decay.

The scheme has been taken up by most of the schools where it’s been offered in Wales. In Swansea, Neath Port Talbot and Bridgend a total of 21,603 children were eligible to take part in the tooth brushing scheme in 2017/18, and 19,329 did so.

At Cadle, almost all the children are tooth brushing and at least 80 per cent sign up for the fluoride varnish application as well.

Assistant head teacher at Cadle, Claire Jones, said: “We’ve been doing this for at least ten years. It gets the children into healthy habits from a young age and decreases the number of cavities they get. If they are brushing at school, they are more likely to do it at home.

“We show them how to brush properly and it is part and parcel of our day now.”

The scheme is set to continue and D2S staff are aiming to improve the access rate. Last year 1,469 primary schools and nurseries across Wales took part in tooth brushing schemes. That was 77 per cent of their target and they are hoping to increase it to 100 per cent this year. 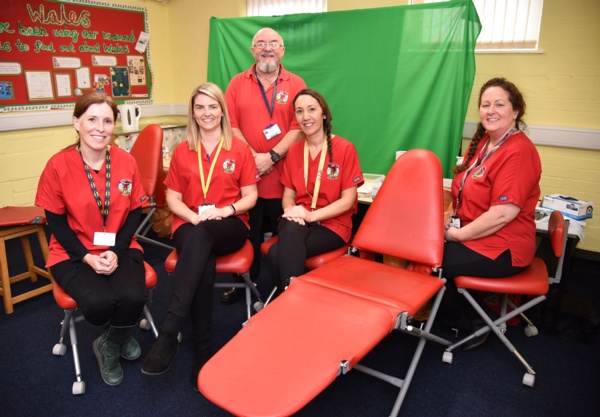 Mandy Silva, D2S dental health manager, said: “Designed to Smile has been established for 10 years now, and is growing from strength to strength. Children’s access to dental services is increasing, so that more children are benefiting from prevention, at home, at their nursery and school, and in dental practices.

“The prevalence of dental caries in five-year-olds has seen a decline in the 10 years that the scheme has been running. Prior to its introduction, decay rates were getting worse. The great improvements seen since Designed to Smile began shows that we need to keep up the hard work to avoid the next group of children having worse decay.”

To find out more: Designed to Smile