Dad walks daughter down the aisle despite brain tumour

Proud dad Peter James was not going to let a brain tumour stop him walking his daughter down the aisle on her wedding day.

The council officer from Swansea was a patient in the city’s Singleton Hospital after suffering a seizure that paralysed  his right side just 10 days before the ceremony.

But with the support of his family and a specialist hospital team, he got to enjoy the big day – and was back on the ward the following morning.

The 59-year-old from Sketty was diagnosed with a brain tumour on 1st August 2019.

His wife, retired nurse Sue James, said: “It all happened very quickly. We came back from holiday in July and he had been fine but within three days Peter couldn’t drive the car.

“He had lost spatial awareness – only three days earlier he had driven back from Bristol Airport.

“He had his first scan on August 1st and was diagnosed with the tumour. It wasn’t operable because there’s more than one area.

“He has had chemo but that hasn’t worked so it will be the radiotherapy route now.” 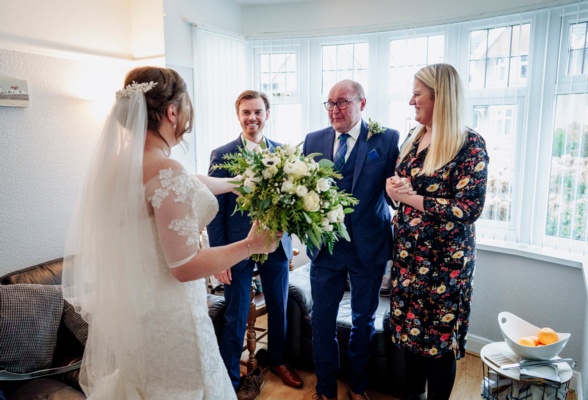 Following his diagnosis, Peter was referred to the Macmillan therapy team, made up of physiotherapists and occupational therapists specialising in cancer rehabilitation at Singleton Hospital.

Right: Anthony Jones and Sophie Kirby made sure Peter was ready for the big occasion. Credit: Martin Ellard

Peter and Sue have two children; son Sam and his older sister Catherine, who would be marrying husband-to-be Tom Townsend on December 6th.

Catherine said: “Being a close family, Dad’s diagnosis hit us all incredibly hard. My wedding was something he was really excited about and proud of.

“He wanted more than anything to walk me down the aisle, and Anthony worked fantastically to make sure this was possible.

“The hydrotherapy proved very successful and enjoyable. Dad was up and about, walking almost normally, in no time.

“From diagnosis, everyone made it their mission to ensure he was in the best place to walk me down the aisle.”

Then, just 10 days before the wedding, Peter suffered a bleed in one of the tumours and the added pressure caused a seizure.

This resulted in him losing the use of his right arm and leg. After tests and assessments, he was admitted to Ward 20 at Singleton.

Catherine recalled: “We had no idea how we were going to pull through this. Dad was totally devastated and it was heart-breaking to see him so upset and hurting.”

That was when Anthony, along with Macmillan specialist physiotherapist Sophie Kirby, rose to the challenge.

They walked Peter up and down the corridor every day, sometimes twice a day, and visited the wedding venue, Oldwalls in Gower, beforehand to see what other support they could provide.

Dad and daughter on their way to the wedding. Credit: Anthony Jones.

“It didn’t stop there,” said Catherine. “On the day they brought Dad to the house, and helped to shave and dress him.

“Most importantly they supported him on our journey down the aisle – something we didn’t think would be possible just a few days before.

“With their amazing help and the positivity and care provided by the team on the ward, Dad could not only be there on the day but be the supportive and loving influence he has been for me all my life.”

Peter, a Swansea Council trading standards officer, was able to enjoy the entire wedding day and stayed overnight before returning to Ward 20 the following morning.

He came out of hospital shortly before Christmas and is now waiting to start the next stage of his treatment.

Sue said: “Catherine was the first of our children to be married. She’s our only daughter so it was very, very important to Peter that he was able to walk her down the aisle.

“If it wasn’t for Anthony and Sophie, we would never have got him there. They were amazing.”

Anthony said he had recommended hydrotherapy to help Peter work towards his goal.

“It was clear it was deeply important to him. He became emotional whenever he spoke about it.

“When he was admitted to Ward 20, Sophie and I were able to visit him twice a day.

“We got him moving and tried to replicate an aisle there as best as we could. 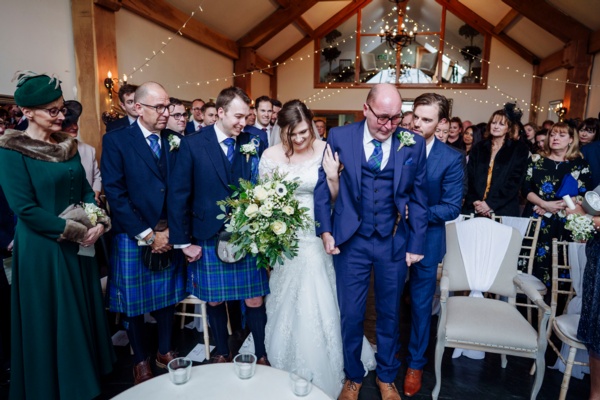 “We really wanted it to happen, and watching him walk down the aisle for real was overwhelming. It was a career highlight for me and Sophie. It doesn’t get any more rewarding than that.”

Catherine said the Macmillan team did much more than their jobs – they gave her and her family some of the best memories of their lives.

“Who knows what’s round the corner,” she said.

“But, thanks to Anthony and Sophie who supported Dad, literally, in walking me down the aisle, I will always know the amazing love of my father that I felt on that day.

“My hope is this can continue so that others who are in the same position can also have these memories and cherish the time they have with loved ones, just as we did.

“Sometimes knights in shining armour don’t come on horseback. They wear green and white polo shirts and squeeze into tiny vans when coming to the rescue.”