Callum back on his feet after coma

A young man whose life fell apart just as he was recovering from a coma is back on his feet again with the support of a UK-first team.

Within three days the 26-year-old carpet fitter from Port Talbot had become so unwell he was put on life support in intensive care.

“It was all a big blur for me,” said Callum. “I woke up six weeks later and didn’t really know what was going on.”

In total he spent three months in hospital, receiving physiotherapy both before and after returning home in early December.

“The physiotherapy was going really well,” he recalled. “By Boxing Day I was walking at Aberavon Beach. I got back to driving.

“I was running on a treadmill and using a rowing machine, to the point where I was going to be discharged from physio.”

But then in late February, completely out of the blue, Callum’s condition began to deteriorate.

His performance in physiotherapy worsened and he found himself struggling to walk, let alone get up the stairs at home.

To make a bad situation even worse, this happened just as the pandemic struck – meaning his physiotherapy and hospital appointments had to be cancelled and seeing a GP became almost impossible.

Happily, with services slowly restarting, Callum is getting help and growing stronger by the day. But during those long, dark months he and his family, struggling for help, felt like they had been abandoned.

Callum has particularly benefited from a new physiotherapy service, the first in its kind in the UK, which follows up patients after they leave intensive care – first on the general ward and then back home.

“The functionality of some patients, while nowhere near what it was before, is too good for them to access community services.

“But they are often scared to go out through the door.

“They aren’t sure what they can and can’t do, what their level of physical ability could be, if they’re going to recover and how long it’s going to take them to recover.

“When you have a heart operation, you have cardiac rehab, you will get a programme explaining everything.

“But there are no services post-ITU because we have such a diverse group of patients.

“We could have everything from an 18-year-old who has been in a car crash to a 75-year-old with chronic obstructive pulmonary disorder, so we can’t put them in groups of rehab.

“For the last 10 years or so we’ve been doing a follow-up clinic. We see patients at three months and we offer them a six-week period of rehabilitation after that.

“But you hear of the devastation people have when they first get home, how they can’t get up the stairs, how they’ve having to live downstairs, how they won’t go out of the house.

“That led us to think about having a team that would follow them from ITU onto the ward, give them a little bit of extra rehab on the wards and then follow them home.”

Plans for a rehab programme for post-ITU patients were developed and approved earlier this year, with funding for a one-year pilot provided by the health board’s Critical Care Implementation Group.

But just before the new service was due to be introduced, the outbreak forced everything to be put on hold.

Now it has finally started, with anyone who has been in intensive care for more than three days offered the opportunity to take part.

They are contacted within five days of discharge from hospital and offered follow-up support.

This includes physio sessions at home with physiotherapy technicians Luke Thomas and Adam Fulham, or exercise advice by phone if they prefer.

At 12 weeks, all patients are also invited to a follow-up clinic. This is a virtual clinic for non-Covid patients but as those who have had the virus need an X-ray at this stage, they are seen in hospital at the same time.

Karen said: “The Covid patients have far better functionality than other patients.

“They’ve had a lot of rehab in the hospital, they’ve gone out and are being followed up in the community and they are progressing remarkably quickly.

“However, we are finding that the psychological problems for Covid patients are slightly higher.

“They’ve had quite a large cocktail of drugs and are paralyzed for quite long periods of time.

“We feel there may be more long-term psychological consequences than we would normally expect with some of our ITU patients.

“The psychological effects vary too. You expect the sickest people to be worst but often when you’re sedated and paralysed you don’t know what’s going on around you.

“When you’re awake, watching things happen to other people, it can be more traumatic than for those lying there asleep.

“Some people have no recollection at all of being on ITU, others have very lucid times mixed in with the dreams and the visions and the hallucinations they’ve had because of the medication.

“They have very scary mixed images of what has gone on in ITU.

“Some people come out of it and say, ‘It’s changed my life, my life is so much better now because I survived this.’ Other people struggle and feel like they can’t get over it.”

There are also issues for patients who went into ITU before the pandemic but came home to an entirely different world because lockdown was in force.

Everything had changed. Before, they may have wanted to watch a football match on the TV – except now there was no football. That, Karen said, was a huge shock as they hadn’t truly realised what they had been through.

“Sadly, we’ve also had quite a few patients who have lost important people, because Covid tended to affect families.

“That’s a huge aspect of it. You get a little bit of survivor guilt as well as the consequences of the horror they went through.”

The feedback since the physiotherapy programme started has been overwhelmingly positive. As the same team provides physio in ITU, on the ward and at home, there is that important element of continuity of care.

Karen recalled one patient saying the team understood what he had been through, so being able to talk about his experiences to them had made a huge psychological difference.

She added: “It was fortunate we had already agreed the programme, otherwise these patients would not have been seen for three months. They would have had nothing after they got home.

“The service is unique. There’s nothing like it anywhere else in the UK. It’s fantastic and I’m so proud of it.

“We have an incredibly supportive management team.  The matron, Carol Doggett, the nurses, everyone has been amazing. 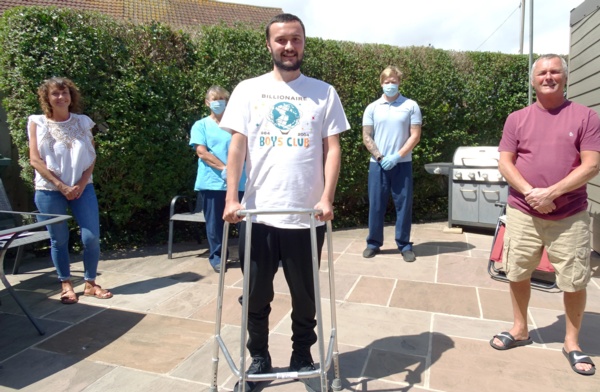 “John Gorst, ITU consultant, has been very supportive, as has Paul Temblett, the consultant intensivist who runs the follow-up clinic. Everyone has backed it.”

The team has been helping Callum since June, and it has made a tremendous difference in such a short space of time.

He has no idea what caused his sudden deterioration after he seemed to be doing so well.

“I got worse and worse until I couldn’t stand up from the settee. I couldn’t get up the stairs. I constantly had to be helped to move. I fell three times, one resulting in a trip to ED.

“I just struggled for all those months.”

Callum’s younger brother Jack and parents Keith and Tina were shielding with him. They did what they could to help, including repeating some of the physio exercises he had been given earlier.

Despite their best endeavours, though, Callum continued to suffer both physically and mentally.

“We couldn’t get to see anyone to nip it in the bud early. I became increasingly dependent on others,” he said.

“I would stay in bed just because it got so difficult to get about, to get down the stairs.

“There were days when I didn’t want to face the world. I didn’t even want to speak to my own parents and family.

“But having physio gives me some structure to my day and a determination again to get better.

“I dread to think what position I’d be in now without the help I’ve had from the physios. I would probably be bedbound.

“The sessions benefit me physically and mentally. I feel as if I’ve accomplished something rather than just lying in bed or sitting on the settee, watching TV.

“The physios have given me purpose again, and a bit of fight.”

Keith said the mood of the entire household had changed.

“When Callum was feeling down we were all down. Jack has been through a lot, seeing what was happening to his brother – they are very close. He also stopped working because of shielding.

“When the physios came in, it was like a light had been switched on in the house. There was a reason to get up and get ready. Spirits were lifted. It was completely different.”

Mum Tina added: “Having the physios back has made it easier.

“They can show us what we can do to help Callum. And having the physiotherapy lightens his day. We feel he is finally getting help and that something is happening, because he had hit rock bottom.”

Now not only is Callum having physiotherapy three times a week, he is now undergoing hospital tests and seeing a consultant.