A nurse who specialises in treating burns is urging everyone to apply sun cream often and dispose of instant barbecues safely as temperatures soar to avoid “pain and suffering”.

Louise Scannell from The Welsh Centre for Burns and Plastic Surgery at Morriston Hospital has issued advice for adults and children as the heatwave begins.

Temperatures are forecast to rise in the coming days, potentially reaching record-breaking levels, and Louise said it can take just a few minutes for children to be painfully sunburned.

She also said there had been a steep rise in injuries from disposable barbecues buried on the beach, which super heats the surrounding sand.

During hot spells, the burns and plastic team regularly deal with children, in particular, who have suffered serious sunburn injuries. 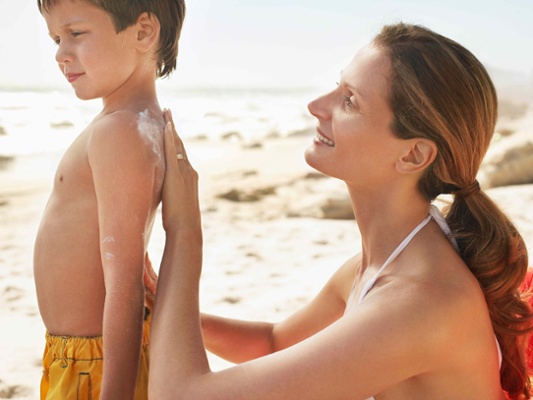 “Sunburn is a huge issue for our department, and children burn very easily. It can take only a few minutes for them to burn no matter what the temperature,” said Louise, who is the paediatric lead for burns and plastic surgery.

“Parents need to ensure their children are protected from the sun and have sun cream applied every two hours – more regularly if they’ve been in the water or sweating – and are kept hydrated.

“Just a few minutes applying a high-factor sun cream could save you and your child a lot of pain and suffering. The higher factor the better, and it’s important that you don’t use an old lotion that’s been left in the cupboard for a while.”

But Louise warned adults have to take care of themselves too as they saw a “considerable amount” of sunburned adults during an earlier hot spell.

A lot of sunburned patients are seen in Morriston’s Emergency Department (A&E), while the more severe cases have to be referred to the burns and plastics team.

Louise said: “We hear similar things from patients when we see them - they often say they should have been more sensible and done the basic things like staying in the shade, applying sun cream regularly and keeping hydrated. But it’s too late by then.

“It can be extremely painful. The only way to treat it is by putting a dressing on the wound and keeping the patient cool and hydrated. A superficial sunburn should heal within seven days, but it’s also the trauma and stress caused not just the pain.”

Louise said the pain and trauma is avoidable if simple advice is followed:

• Apply sun cream to exposed areas of skin. Re-apply every two hours and straight after swimming and drying to maintain protection.

• Spend time in the shade during the sunniest part of the day when the sun is at its strongest, which is usually between 11am and 3pm in the summer months.

• When it is not possible to stay out of the sun, keep yourself well covered with a hat, t-shirt and sunglasses to give you additional protection. You can buy specialist children's sun protection clothing as well.

“The short-term risks of sun exposure are sunburn and sun allergy but the longer-term risks include skin cancer, eye problems, premature ageing of the skin and wrinkling along with actinic (solar) keratosis which is rough and scaly pre-cancerous spots on the skin,” she said.“A lot of us want to have fun in the sun, but let’s be cool and stay safe in the sun.” 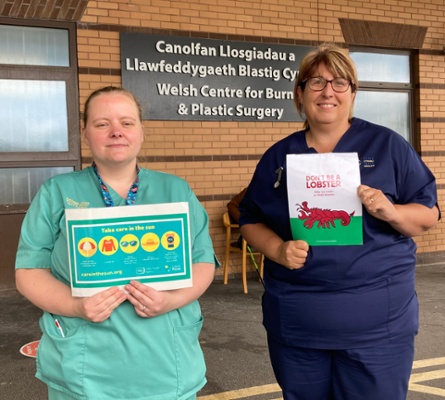 Pictured: Ashleigh Jones (left) and Louise Scannell are warning of the risks of sunburn during the forthcoming heatwave.

Regarding barbecues, Louise said: “Out of all the burn injuries we have, the most common for this time of year is definitely barbecue related.

“There has certainly been a steep rise in injuries sustained from disposable barbecues left on the beach.

“The tendency is to bury the coals under the sand, but that means they can’t be seen which results in people or pets stepping on them.

“That can cause a really nasty injury because the sand is heated by the coals, rather than the coals cooling through the sand. It’s a common misconception, but it’s an important thing to be aware of.

“There are disposable bins for barbecues around some of Swansea’s beaches, so we urge people to make use of them to prevent harm to others.”

Signs of severe sunburn can include:

• blistering or swelling of the skin

• a high temperature of 38C or above, or 37.5C or above in children under five