All aboard vintage bus for nostalgic journey

Members of a social group for people living with dementia and their friends have enjoyed a special trip down memory lane … by bus.

The Forgetful Friends group (above), which meets on Tuesday afternoons in Llangyfelach Church Hall in Swansea, was treated to a day trip to Mumbles in a vintage double-decker bus.

The kind gesture came courtesy of the Swansea Bus Museum and Transport Heritage Centre which provided a 1967 Regent V model used by South Wales Transport until 1982.

The trip was hailed a success by all, with the sights and sounds helping bring back memories for many of the members.

The group was founded by former nurse Elaine Rees, who came up with the idea for Forgetful Friends after her husband, Brian, was diagnosed with dementia and realised that there was a need for such a support group in the Cwmtawe and Llwchwr areas of Swansea.

Elaine James, Swansea Council for Voluntary Service’s Cwmtawe dementia and carer project worker, who helped establish the group, said: “It was a very nice gesture by the bus museum.

“We would never have thought about booking a trip on an old bus, and it was very much appreciated by everybody who attended.

“It was a lovely change of scenery for those who haven’t been on a double decker bus for years, and a nice little trip down to Mumbles.

“It brought back memories, especially for a couple of our members who used to be bus drivers.

“There were lots of different conversations going on about where they used to go on buses, it’s opened up memories and been beneficial for a lot of them.” 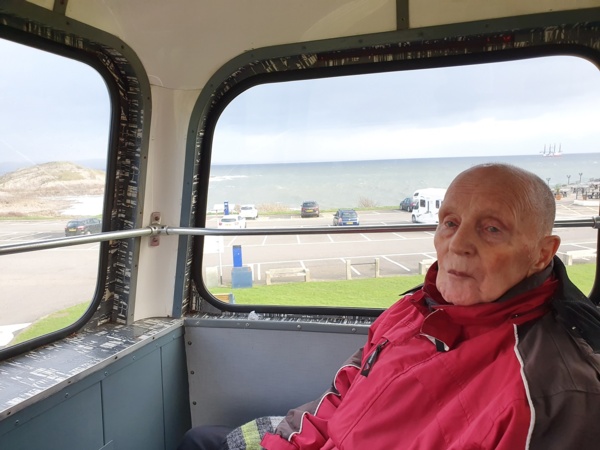 One Forgetful Friends member, 81-year-old Brian Rees (below), said: “I thoroughly enjoyed the trip and from where I was sitting, upstairs in the front, it was almost like being back in work as a bus driver.

“The sound of the engine struggling on the slope up to the mini roundabouts, being aware of the driver changing gear, getting the speed up, and we were off again!

“I also remember the camaraderie of my fellow colleagues in Pontardawe Bus Depot, and the fun times we had when lunching in the canteen there.”

David Roberts, a spokesman for the museum, which is based in the Winch Wen, said: “The basis of Swansea Bus Museum and Transport Heritage Centre is to look after for future generations its fine collection of former South Wales Transport buses but we also have a passion for community involvement.

“With no funding, we are a privately-funded charity, we feel that we need to provide opportunities for school children or, as in this case, people of a more senior nature.

“We find that when we have offered trips like this for nursing homes is that a few days later, people will start talking about the smell of the bus, how it felt to travel on the bus.

“Buses are totally different today, so it brings memories flooding back for them, the sight, the smell, even the sounds of the engine. It’s amazing.”