Above: Consultant surgeon Tomas Tickunas meets up again with Dave Evans, who returned to Morriston for his first follow-up clinic since his operation.

The father of Welsh acting star Luke Evans has echoed his son’s praise of the NHS after badly injuring his hand in an accident with a circular saw.

The index finger was almost severed in the accident while Dave was left with deep wounds to two other fingers and the thumb.

Following a complex five-hour operation at Morriston Hospital, Dave’s finger was not only saved but he’s hoping to have full use of his hand again before too long.

He is now back home in Aberbargoed but has returned to Morriston with his wife, Luke’s mum Yvonne, for the first of a series of follow-up visits. 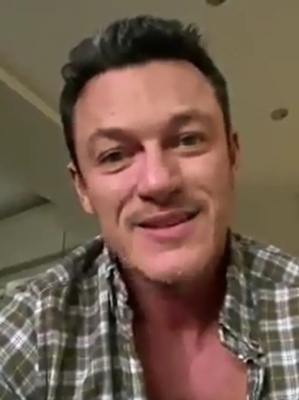 Dave was using the table saw in his home workshop to cut wood for their wood-burning heater.

“My finger just dropped a fraction and I nipped the top of the blade. It’s a table saw I’ve been using for 30-odd years. I’ve cut thousands of pieces of wood on it and never have I nicked that blade.

“But that morning I just went down a little touch on it, and that was it.

“I looked down and I could see it was bad. The index finger was the worst. It was just flopping.

“I held my hand tight, walked into the house and said to my wife, ‘I’ve cut my fingers’. She said, ‘What have you done now?’ And when she looked, her knees buckled.”

Yvonne said she just about managed to control her shaking hand to dial 999. Fortunately, they were helped out by neighbour Diane Selwood, a nurse at Ysbyty Ystrad Fawr who had just finished her night shift.

She helped staunch the bleeding, then advised Yvonne to take Dave to Prince Charles Hospital in Merthyr rather than wait for an ambulance.

Yvonne said: “Diane was outstanding. These people live their job. They look after their neighbours as well as their patients. Her husband Barry actually drove us to Prince Charles Hospital.

“Then the Red Cross car support people took us from Merthyr to Morriston here, all for free. It took all the pressure off.”

Mr Tickunas said: “Mr Evans had cuts to his thumb, index finger, middle  and ring fingers. In total he cut six nerves, three arteries, and three tendons. The index finger was essentially hanging by a bit of skin and a bit of tendon.

“We had to repair the ligament, two tendons and two nerves.

“Because the artery was badly damaged, we took a vein from his wrist and used it to bridge the defect in the artery to restore the blood flow to the finger.

“We also did the nerve repairs to the other fingers.” 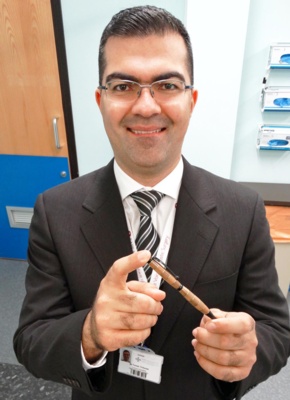 Making pens is one of Dave’s hobbies – and he has presented one to Mr Tickunas as a gesture of thanks.

Mr Tickunas thanked consultant anaesthetist Robert King, everyone involved with the surgery, and staff on Pembroke Ward who looked after Mr Evans following his surgery.

He added: “Mr Evans has done very well. He has been a very positive patient from the beginning, and it was a great pleasure to treat him.”

Yvonne described everyone involved as one hundred per cent heroes, with both she and Dave having particular praise for Mr Tickunas.

“He operated on me until around 2am,” said Dave. “And then, lo and behold, he’s back in the hospital the next morning, right as rain, asking me how my hand was and checking up on me.

“My finger is intact, which is remarkable. I’ll have to come back and forth to have the dressing done, and within a couple of weeks it will start to heal. Then the therapy will be the next step.

“I love my hands and I’ve tried to look after them for years, but it was just one of those mishaps and they’ve saved my hand. I think I’ll have full use back – I’ll try my best.

Luke’s video has had 800,000 views on social media and his message of thanks was picked up by BBC Wales.

Luke said: “My dad has been looked after so well, by everybody in that hospital and I just wanted to say how lucky I feel, and how grateful I am to have a health service that allows my dad to be treated for all these things and hasn't need health insurance or anything. It's just there for us.”

Yvonne said she and Luke discussed the idea for the video while Dave was in theatre and they were being comforted by staff.

“Tomas came out at midnight to reassure us about what he had done, and was still doing,” she said.

“After he went back out, Luke said, ‘How can we say thank you to these people? I’ll have to do something’. We thought that would be the best thing to do.”

Dave added: “What Luke said on the video, that’s how we feel. We are so grateful for what has been done and he put that over so well. Everything he said was spot on.”