Giving elderly people in Swansea a cwtch after they have suffered a fall is helping to keep them out of hospital.

But this isn’t a cwtch in the Welsh sense, though a hug may be part of it.

Traditionally, when older people have fallen, the advice is not to move them, and not to give them any food or drink until an ambulance arrives.

Main image above: Debra inside the OPAS hub at Morriston

However, this view has now changed. Leaving them where they fell can in fact cause serious physical problems – and may lead to them needing hospital admission when the fall itself might not have.

This is especially true with ambulance times becoming unavoidably longer, meaning some people are left on the floor for many hours.

An education programme known as Cwtch has been introduced in nursing homes in Swansea and will be rolled out to those in Neath Port Talbot.

It has already won an award just five weeks after being launched and the initial feedback from nursing homes has been overwhelmingly positive.

The initiative is the brainchild of Debra Clee, an emergency nurse practitioner who recently joined the Older Persons Assessment Service, or OPAS, at Morriston after more than 20 years as an A&E nurse.

“We are trying to change the narrative out there and say that if they can be moved then we need to move them,” Debra said.

“When you hear stories about someone never recovering from a fall, often it’s not the injury itself but being left on a hard surface for a very long time.

“This can cause acute kidney problems, it can give them pneumonia, it can cause muscle tissue to break down.

“If they are not being given anything to eat or drink they can become dehydrated. By the time they come to us they are not fit for surgery, if it’s needed, and are quite unwell.”

So Debra came up with the five main principles underlying Cwtch to try to stop these and other problems occurring:

"We are going into nursing homes rather than residential homes as they have qualified staff who can assess the patients.

“There are circumstances when they should not be moved. But even then we say you can give them painkillers and something to eat or drink.

“In many cases they can be helped up, maybe given a cup of tea and put into bed with some paracetamol.

“Within a few hours or by the next morning they could be up and about again. If necessary, a GP can be called to see them or they can be taken to the Minor Injury Unit or to us here in OPAS.

“Very often this can be done by car. But if they are left on the floor for hours then they will definitely need an ambulance and quite likely admission to hospital.” 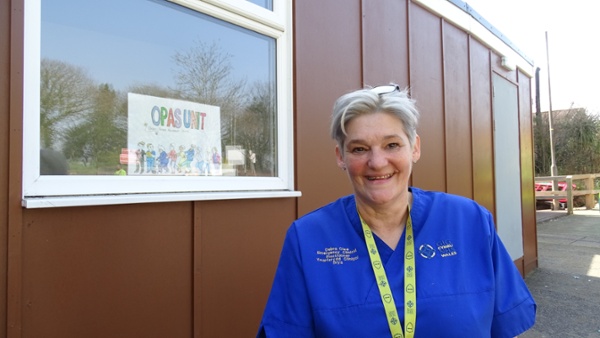 OPAS is a multidisciplinary service established in 2018, made up of healthcare professionals specialising in the care of elderly people.

During its opening hours, it can see older people who may otherwise have faced a long, sometimes very distressing wait in A&E.

It is based in a hub located alongside Morriston’s Emergency Department and has six spaces for patients as well as a therapy area.

Patients can have tests carried out and be seen by a senior clinician. In many cases this avoids the need for hospital admission.

Debra joined OPAS in December and the idea for Cwtch came around during a discussion with consultant geriatrician Dr Liz Davies.

“I said we needed to do something. We see it all the time – these elderly people coming in after being on the floor for hours. Times need to change because it’s getting worse.

“And Dr Davies said – do something. Put some training together and get out there. So that’s what I did.”

A little more than a month after it was introduced, Cwtch picked up Best Presentation Award from the British Geriatric Society for Wales.

The presentation was made by geriatric registrar Dr Alex Burgess.

Dr David Burberry, one of the OPAS consultant geriatricians, said: “Deb has been an inspirational addition to the OPAS team since she joined us in December.

“We are immensely proud of the work that both she and Alex Burgess have already undertaken to improve the care of older people across Swansea Bay.

“We are looking forward to seeing how this project develops in the coming months.”