A Morriston Hospital team taking part in a life-saving research study has reached the peak of success when it comes to enlisting patients.

The hospital’s stroke department is one of almost 50 international centres involved in the study, called ELAN*.

This focuses on patients with a heart condition known as atrial fibrillation (AF) who have had a stroke.

Specifically, the study looks at the optimum time to give these patients anticoagulation, or blood-thinning, medication to reduce the risk of a further stroke.

There are 17 UK centres participating in ELAN, and 48 across the world in nine countries, including Switzerland, Austria, Finland, Germany, Ireland, Belgium, Greece and Norway.

They have recruited 25 local patients for the trial, making Morriston the leading recruiting site in the UK and fifth best in the world.

The team also recruited ELAN’s 500th patient just before Christmas, and that has now resulted in it being sent a giant, personalised bar of Toblerone from the study’s coordinating centre in Switzerland.

AF is one of the most common forms of arrhythmia, or abnormal heart rhythm, affecting one in 200 and getting increasingly common with age; one in 12 people aged over 75 has it.

It prevents blood from flowing properly through the heart, significantly increasing the risk of a blood clot and a stroke.

If someone does have a stroke, following the initial life-saving treatment they are given anticoagulants to reduce the risk of another stroke.

Dr Slade said: “We know the highest risk of having a further stroke is very close to the time you have your first stroke.

“But also the highest risk of the blood thinners causing bleeding in the brain is in the first few days as well.

“So we’re trying to work out when the right time is to start those blood thinners, to prevent stroke in the future without causing any harm.

“What’s new about this trial is that nobody has ever looked at starting the coagulants within the first few days. Previously it’s always been looking at over a week.”

Dr Krishnan added: “Elan is looking at early versus late. Early treatment could be within 48 hours of having a stroke, depending on the stroke severity.

"Late initiation is also variable, depending on the severity, and could be as long as 12-14 days.

“This is to reduce the risk but maybe we are doing more harm by waiting longer to start the correct medication.

“We’re fairly certain it is safer to give it early. But the only way to be certain is to do it in a randomised trial.

“This isn’t a drug trial. The blood thinners we use are standard of care. It’s about the point at which they’re started.” 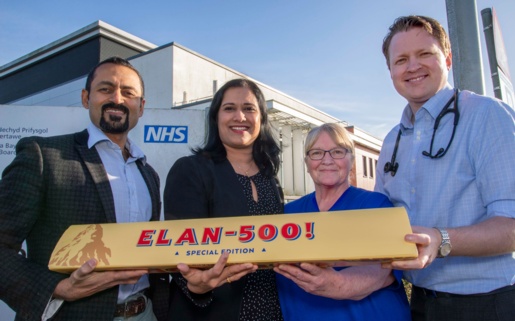 All patients coming through Morriston stroke department are screened and those suitable are asked if they want to take part in the trial.

If they agree, their details are fed into a computer which randomly decides whether their anticoagulation should start earlier or later.

They are then monitored for 90 days and the data gathered submitted to ELAN.

The international study, one of many the Morriston team is involved with, is likely to last another year or so and then the results will be analysed.

Ultimately its findings will determine the point at which anticoagulation medication is given to stroke patients at Morriston.

Dr Slade said: “By including our local population, it makes the trial more relevant to patients around here.

“It will be more useful to us in the future because we will know the trial results will be applicable to them.”