A former singer has been given his voice and his life back less than a year after a stroke that almost proved fatal.

The 46-year-old could not walk or talk after becoming ill in May last year, with doctors warning his partner to prepare for the worst.

Although he still has a long way to go, Richard can walk again, enjoys singing and playing the drums, and has impressed his stroke consultant with the pace of his recovery.

After losing his job during the pandemic, Richard joined Swansea Bay, working in the canteen at Morriston Hospital where he became a familiar figure to many of the staff.

He then left the health board to take up another job, only to return to Morriston not long after – only this time he was fighting for his life.

“I was at home. I felt something crack in the back of my head and I said to my partner, we have a problem, I’m going to have a stroke,” he recalled. “Lo and behold, I was right.

“There was no ambulance available so I had to get driven in by my next door neighbour. My niece and my partner put me in the car because my right side had already started to go.

“I came in to A&E and I was in resus for three-four days. It was quite serious. My partner was told on a number of occasions to prepare for the worst.”

After coming through that crisis, Richard stayed in the stroke ward in Morriston for around four weeks. After that he was transferred to Neath Port Talbot Hospital for rehabilitation. 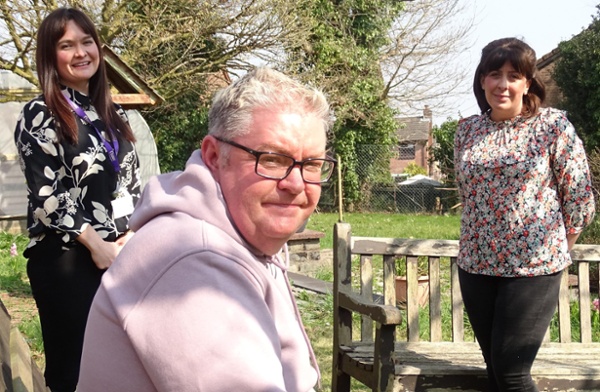 Richard learnt to walk again during his time in Neath Port Talbot. He was discharged home where he was supported by a physiotherapist five days a week for six weeks, and by an occupational therapist.

Then he was introduced to the brain injury service at Morriston Hospital, which runs the 12-week course with Nordoff Robbins Music Therapy.

Richard, who had resigned himself to never being able to sing again, did indeed start singing, as well as playing the drums to help his recovery.

All this was with the support and encouragement of Nordoff Robbins music therapist, Jo Humphreys.

Richard said: “We would drum every week just to try to make my hands and my arms work more, to get my brain to tell my arm what it should be doing.

“I used to be in a brass band but I also used to lead the band on parade, so drumming was second nature.

“Then we tried singing, and that’s what we did – a bit of drumming, a bit of singing.

“For the last five weeks it was only singing, because I was quite comfortable with the singing, which I never thought I would be able to do again.”

Richard said that, when he saw his stroke consultant in December, he was told his recovery had been better than expected.

Although his music therapy sessions have now finished and Richard knows he has a long way to go in his recovery, he is already returning to another former pastime.

The ex-bowls player has been in discussions with the Stroke Association and with Bowls Wales to set up weekly bowls sessions for stroke survivors in either the Neath Port Talbot or Swansea areas.

He also hopes to continue his association with the Morriston service by attending group sessions or events, when the pandemic allows.

“The music therapy gave me something to look forward to every week. It was making my brain work, and because I had a brain injury, it was important to get other things going. 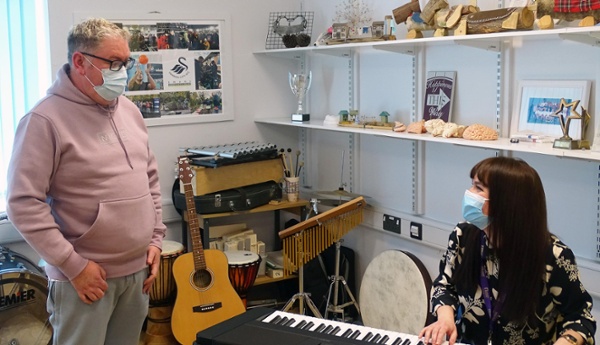 “It has been a constant every Friday, it’s a constant piece of interaction and gets me to do things that I loved in my life.”

Richard in full singing voice (behind the mask!), accompanied by Jo

Jo said people with a stroke or other brain injury not only faced physical but emotional challenges too. These included loss of confidence, self-esteem, and self-worth.

“There is often a loss of purpose, motivation, and identity as well,” she said.  “When we first started, I did see a lot of those things in Richard.

“We started quite tentatively, with a little bit of drumming. He told me categorically he would not be singing, which I accepted.

“But I had faith that he had this enormous musical and creative potential that it would be useful for him to reconnect with and explore further.

“So from those first few tentative beats on the drum to now being up performing whole songs, it’s an enormous privilege to have seen his confidence grow, his self-belief.

“That’s the most significant thing that I have seen over our time together, I would say. Seeing now how that confidence can translate into other areas of his life.”

Please follow this link to find out more about Nordoff Robbins.