A little man with a big heart – and strong legs – has raised more than £1,000 as a way of thanking staff who looked after him in hospital.

Elliott Evans spent almost a fortnight in Morriston’s Oakwood Ward after banging his head while playing in a park.

Main photo above: Elliott reunited, with Dr Clare Dieppe, who first saw him when he arrived at the Children’s Emergency Unit.

During that time, he celebrated his seventh birthday, with the nurses making a fuss and allowing him home with his family for the day.

When mum Sam decided she wanted to do something to thank the NHS, Elliott got on board with the idea straight away.

So the youngster, with support from his parents and big sister, completed a sponsored cycle ride along Swansea seafront, raising £1,020.

Elliott’s donation is being divided between the Children’s Emergency Unit, or CEU, and Oakwood Ward at Morriston Hospital.

Sam, a nurse who worked in the CEU but is now with The Grove Medical Centre in Uplands, said they had been in a park in the Afan Valley when Elliott banged his head twice in a matter of five minutes. 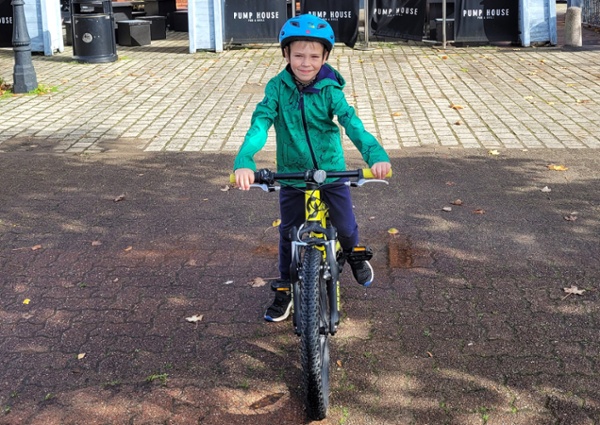 Sam checked him over and he was fine, only for him to complain of feeling unwell on the drive back to the family home in Sketty.

Right: Getting ready to set off from Swansea Marina

On arrival at the CEU, Elliott was checked over by consultant emergency paediatrician Clare Dieppe.

“He initially had symptoms of a concussion. He had slurred speech and wasn’t walking properly,” said Sam.

“Dr Dieppe saw him. He seemed okay and didn’t need any CT scans. And then, as we were about to go home, he deteriorated back to what he was when he originally came in.

“Dr Dieppe ordered a CT scan. There were still no signs of concussion and then he got moved from being in the CEU down to the main ED. From there he was taken to Oakwood Ward.

“It was found that he had a brain infection, which was a coincidental find.

“He was looked after on Oakwood for 12 days. He was six when he came into hospital and seven when he left.”

For his seventh birthday, the nurses gave Elliott a card and a bag of toys. He was allowed home for a few hours but had to return later that day because he was on intravenous medication.

“He’s back to himself now, completely back to normal,” said Sam. “You would never realise he had been unwell.”

The idea for the sponsored bike ride came about while the youngster was still being looked after on Oakwood Ward.

“It was something Elliott and I both discussed one night whilst we were up on the ward,” his mum said.

“I said I don’t feel the NHS gets enough credit, and I wanted to do something to be able to help the CEU and Oakwood Ward. Elliott was fully on board when I suggested it.”

The bike ride’s official route was from the Pump House in Swansea Marina to Verdi’s in Mumbles.

However, Elliott – accompanied by Sam, dad Andrew, sister Eilidh, aged nine, and uncle Chris Evans – also cycled from the family home to the starting point and back again afterwards. 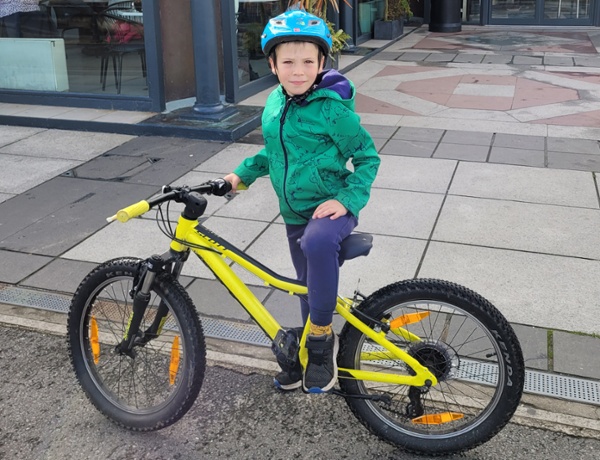 In total the schoolboy completed around 10 miles, with donations flooding in from family and friends.

Left: Elliott at the end of his sponsored ride

“My stepdad John McCulloch put in £100 to begin with and then added another lot of money to it,” said Sam.

“Grove Medical Centre in Uplands also did a baked potato day and donated the proceeds to the fund as well.”

Along with his family Elliott visited Morriston Hospital with the proceeds of his fundraising. There he was reunited with Dr Dieppe in the CEU, and with paediatric matron Sarah James.

Sarah said: “We appreciate the time and effort Elliot and his family have taken to support Oakwood Ward and the children who are admitted.

“With the fantastic amount raised, we will be purchasing games for children to play at their bedside and in the playroom.”

Dr Dieppe added: “The Children’s Emergency Team are thrilled that Elliott raised money for us and the ward that looked after him.

“We hope to put the money towards some sensory equipment for the children and young people we see with special needs so that they are able to manage their time in the Emergency Department more easily.

“Thank you so much, Elliott.”