Patients go home sooner thanks to specialist team...Plus a personal insight into Breaking the Cycle.

Patients who are well enough can now leave hospital sooner after the expansion of a specialist team.

Issues that are preventing discharge are identified and tackled by Morriston Hospital’s patient flow coordinators.

Working with colleagues across all departments in the Swansea hospital, they help speed up access to tests and assessments that have to be completed before patients can leave. 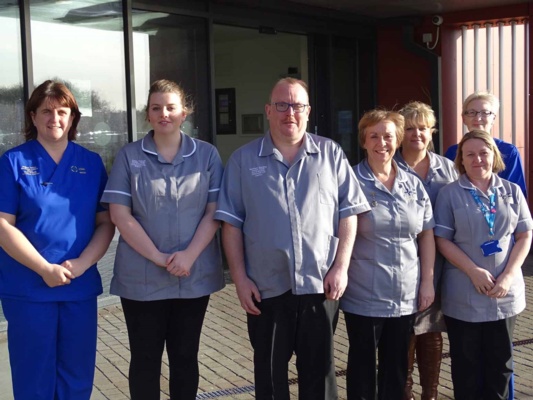 Left: The patient flow team (see below for full caption)

They are also able to refer those who need extra assistance at home to social services and expedite transfers to other hospitals.

Service Group Manager for Emergency Care and Hospital Operations Alison Gallagher said the team has won praise from clinical staff, not least for taking time-consuming paperwork off them so they can spend more time with their patients.

She said: “The role of the patient flow coordinator is complementary to the ward multi-disciplinary team. Their workload is generated from the daily board round and the coordinator will agree a set of tasks with the nurse in charge, releasing nursing time to invest in patient care.

“They are a real asset to the Morriston team and have been welcomed by the ward teams.”

Matthew Golding, Leanne Sayce and Carys Powell began their new roles as patient-flow coordinators in December 2018, expanding the existing team of Anne Shelley and Mandy Coates, who have been in post since 2016.

The team has had a positive impact on the hospital and community, particularly during winter pressures.

Space freed up for admissions results in better patient flow through the Emergency Department, which in turn enables ambulances to offload their patients and return to answering calls.

Matthew, who previously worked in palliative care, said: “Our aim is to achieve safe, appropriate and timely discharges.

Leanne said: “It’s very challenging. You get to understand the complexities of how the hospital works and how there are so many factors to take into consideration for patients, such as ensuring packages of care are in place.”

The patient flow coordinators are part of the bed site management team.

Part of their role is to relay information to managers working in the hospital’s coordination centre throughout the day.

Helen said they’ve been a vital addition to the department.

She said: “The discharge team was established before the patient flow role, but looking back now I don’t know how we managed without their eyes and ears on the ground.”

Morriston Hospital’s Interim Service Director Dr Mark Ramsey said: “The patient flow coordinators are such an asset on our wards.

“Mandy Coates and Anne Shelley deserve a huge amount of credit as, when we started in 2016, it was a relatively unknown role, so it’s fantastic to see the team go from strength to strength.”

My name is Abby Bolter and I am a senior communications officer with ABMU Health Board.

This winter I took part in Breaking the Cycle, an initiative designed to reduce hospital delays by getting office-based workers onto the wards to support front line staff. This is what happened.

Office-based workers like myself took to the wards as part of Breaking the Cycle (BTC), a two-week initiative designed to improve patient flow.

In my role as a ward liaison officer (WLO) at Morriston Hospital – a voluntary position just for BTC - my job was to act as a voice for the wards I was assigned to, which included Pembroke, wards G, H and also cardiac.

I was required to gather regular information from ward staff on patients who were definitely going to be discharged, those who might be discharged and those who were facing delays – so called RED patients - whether that be for tests, review or social care packages.

At 8.30am, 12pm and 3pm, myself and the other WLOs gathered in the hospital’s operation centre to relay our information to the bed management team and the day’s silver commander.

Also present at the meeting were the full-time patient flow coordinators and representatives from pharmacy, radiology and other departments, who were able to escalate any outstanding issues.

One of the main aims of BTC is to focus all staff on achieving the best operational performance and best standard of care for our patients.

And it certainly felt as though I was a part of a huge team, whose clear goal is to make things better for our patients.

Going from a mainly desk-based job to a clinical setting was a challenge, especially as I have only been in the NHS for six months.

It was a steep learning curve becoming familiar with commonly-used abbreviations such as DOLS (deprivation of liberty service), INR (a type of blood test for clotting) and EDD (Expected Discharge Date).

But clinical staff and the patient flow coordinators, with whom I worked alongside, ensured I understood and had the correct information to relay.

My three shifts gave me a good insight into the incredibly hard and complex work that goes on daily – largely unseen by patients and many other staff – to keep the hospital and wider NHS running smoothly.