Attempting to summit three of south Wales’s highest mountains on the same day would be tough for most people but when you have Multiple Sclerosis, it is a serious prospect indeed.

Nerys Jones, however, has set herself the challenge of doing just that after being diagnosed with the condition.

The 24-year-old will aim to climb Sugar Loaf, Pen y Fan and the peak above Llyn y Fan Fach, all within 10 hours.

Nerys, who works as a nurse in Morriston Hospital, will be joined by colleagues from Ward J, along with family and friends.

Her ultimate aim is to raise awareness of the condition alongside £1,000 for the MS Trust.

Speaking about her diagnosis she said: “It was during lockdown but I had pretty good support, especially as I was still working, everyone on the ward has been brilliant.

“I also have good support from my family. I’m very lucky.

“I’m trying to be positive and look on the bright side of things. I was very young being diagnosed, which is a good thing, and I’ve got a positive attitude about it.”

Multiple sclerosis or MS is a condition that can affect the brain and spinal cord, causing a wide range of potential symptoms. It’s a lifelong condition that can sometimes cause serious disability, although it can occasionally be mild.

Some of the most common first symptoms of MS are fatigue, problems with balance or co-ordination in the legs, unusual feelings in the skin such as pins and needles, pain or numbness, slowed thinking, and problems with eyesight.

Nerys’ message to anyone who may be worried is to seek advice.

“You should just trust your instinct,” she said.

“I felt as though I was having an electric shock every time I put my neck down, then it disappeared for a couple of years but then came back.

“It was suggested it was a trapped nerve but I knew it wasn’t normal and kept pushing. I went for a MRI scan and was diagnosed on April 26th of last year.”

Nerys is currently participating in a MS clinical trial.

She said: “I decided to participate in the MS Evolution Trial which compares an upcoming drug to a currently licensed drug to help slow down the progression of the condition.

“It is run by the neurologists and the Clinical Research Centre in Morriston Hospital, who have been brilliant in supporting me through this new journey.” 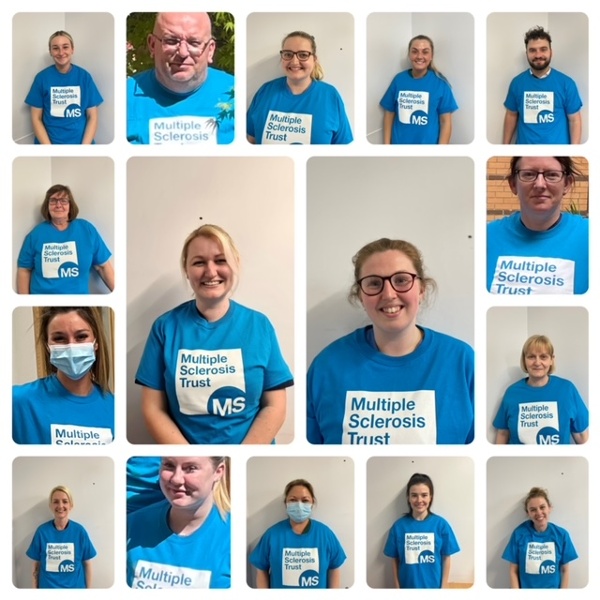 Pictured above: Nerys larger right pic and her ward manager, Sam, large left pic, along with Ward J colleagues ahead of the challenge.

Showing remarkable fortitude, Nerys is keen to raise awareness of the condition.

She said: “They do class it as a terminal condition, it affects your life expectancy by about five years.

“It effects people differently depending upon which nerves it attacks in your spinal cord. It can affect you mobility or way of thinking – it can cause confusion in some people, it can affect your eyesight, quite a few things, everyone is different.

“It then gets progressively worse as you get older and it continues to attack your spine.”

Rather than allowing herself to be phased by such a prognosis, Nerys devised the three peaks challenge.

She said: “I wanted to do something a little bit different, that everyone would enjoy, and a walk is something that more people can be involved in.

“It’s a big challenge. We measured the walk and it’s 11 and a half miles.

“We’re going to do it all in one day and I think it’s going to take us two and a half hours to climb each mountain, staring at 7.30am with Sugar Loaf in Abergavenny.

“Hopefully, if all goes to plan, we will finish around 5pm.”

The good thing is she won’t be alone.

“At the moment there’s around 40 friends, family and colleagues signed up for the walk.

“I’ve tried to be as active as I can but it’s definitely going to be a challenge for everyone taking part. The main thing is to raise as much awareness as possible.

“I’d quite like to raise £1,000, I don’t want to be over optimistic with setting the target, but the more the better, and it’s such a good charity.”

Samantha Evans, Ward J manager, said: “We are a large ward and our staff are very close. When one of us is in a time of need then we will all work together to support that person.

“When Nerys was diagnosed it was difficult for her as we were in lockdown so hard to see friends and family, so her work family were additional support, in order to help her come to terms with her diagnosis.

“When she mentioned that she wanted to raise awareness and money for the MS Trust, we didn’t hesitate and got behind her to help organise the mini peaks challenge.

“We will continue to support her whenever she needs it, as she is a well valued member of our team.”