Older people with memory difficulties in Swansea are more active and steadier on their feet after signing up to a new walking hockey team. 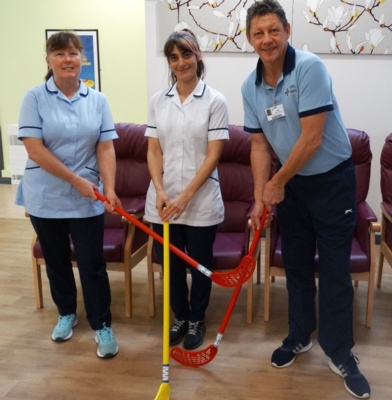 The team was set up by the community mental health physiotherapy service.

It offers exercise in the community for older people with cognitive impairment.

“Many also have difficulties with everyday activities, such as standing up and walking.”

The service was developed just 10 months ago as part of a restructuring of older people’s mental health in Swansea.

The aim was to help improve balance, mobility and posture of older people – which many with cognitive impairment often struggle with, doubling the risk of falls.

Hara and her colleagues Nigel Stevenson and Mena Evans, who are physio technical instructors, lead the sessions.

They began the exercise groups at Garngoch Hospital seven months ago.

Pictured right: Nigel leading a warm up with patients

Hara said: “We added exercise to the end of the existing cognitive stimulation therapy (CST) sessions, for 45 minutes to an hour, once a week.

“They focused on light strength, aerobic and balance exercises.

“We did this for 14 weeks and had a really positive response from the patients attending and their relatives.”

Assessments were carried out at the start of the 14-week programme and throughout. 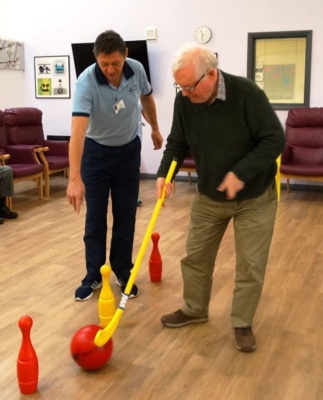 Hara said: “We had feedback from patients that they feel more confident in their mobility.

“They also enjoyed the exercise group and were eager to keep being active in some way.”

After some discussion with the patients and nursing staff, Hara and the team suggested a team sport.

She said: “The idea was that the team sport will require more advanced motor skills and cognitive skills such as planning and negotiating than the initial exercise group.

“Hockey was then chosen by the patients.”

The sport has now become the second stage of the exercise programme for the specialist service.

It is a step up, following on from the exercise sessions, for patients who are ready to further develop.

Hara said: “Some of the patients have been coming since the first exercise group and the change in them is really nice to see.” 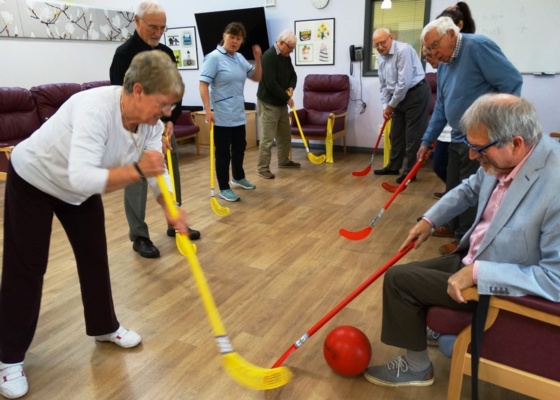 They involve a warm up, general drills including passing the ball in different directions with body rotation, guiding a ball in and out of cones and passing the ball side to side with the hockey stick – before game practice.

Hara said: “The patients are really enjoying the hockey team and it’s been fantastic to hear all the positive feedback at the end of the sessions.

“It has really got them enjoying being active, which is great to see.

“One patient has even bought a treadmill for their home and uses it every day.

“The most important thing for us is to engage the patients in the activity and empower them, reminding them that neither dementia nor old age are limiting.”