Two Swansea Bay UHB speech and language therapists have turned to the written word to help their patients, with the publication of a children’s book.

Lisa Farquhar and Rhian Hoccom have penned The Sound We Found - a picture book which tells the story of a baby bear’s day, through the medium of rhyme - to encourage youngsters to form the basic sounds which enable coherent speech.

The pair, who work for the Welsh Centre for Cleft Lip and Palate in Morriston Hospital, have also produced an online video linked to the book which shows parents how best to read the story with their child to encourage speech development.

Although specifically written to help children with a cleft lip and palate, the lyrical and beautifully illustrated story is recommended reading for all youngsters. 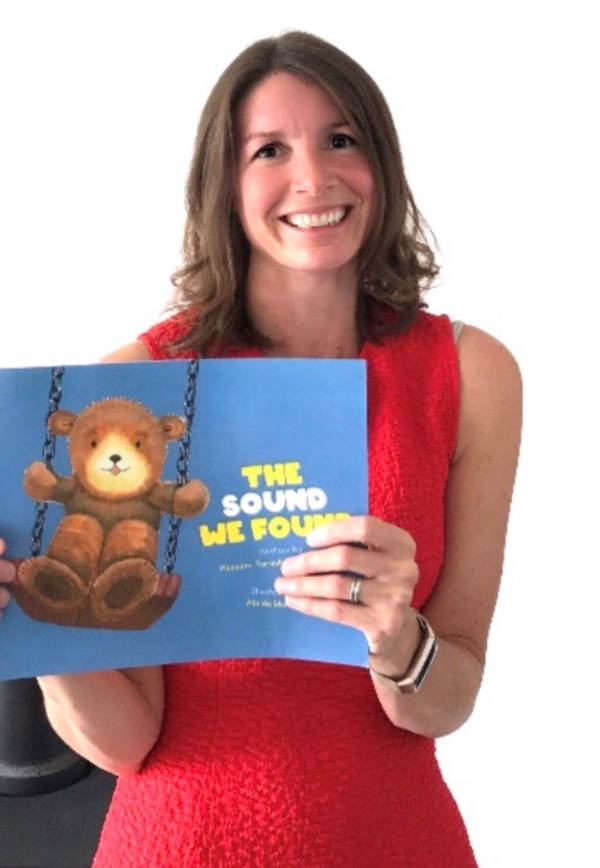 Lisa Farquhar (left) said: “Children with cleft lip and palate are in real danger of not developing speech in the same way as other children. They are born with a gap in the roof of their mouth and as such do not have the right equipment to learn to talk. With surgery as a baby, followed by speech and language therapy we can help them to say their sounds and be understood.

“The idea was that by using a story book parents can help them develop their sounds. It’s based upon what we call input modelling of sounds – children need to look and listen at the same time, they need to observe the lip and mouth movements, but there is no pressure to say the sounds themselves.

“We only get a limited amount of time with the child so involving parents in key, so a book like this is great because it’s something they can use every day – the way in which children learn sounds is through repetition.

“There’s a QR code on the actual book which takes you to the website so they can watch a video, which shows the parent how to use the book to encourage speech – you don’t have to watch it but lots of people have said that they found it really helpful.

“Any parent can read a story book, but if it helps to start showing children how to use sounds properly, in the long run it will help prevent them developing their speech with incorrect sounds.”

Underlining the book’s suitability for all children, aged six months up to the age of five, she said: “It’s great to read stories to any child as reading improves a child’s comprehension, listening, speaking, spelling, vocabulary and writing, as well as their general knowledge and imagination. It also develops the parent-child bond, promoting intimacy and wellbeing.”

Explaining the content Rhian Hoccom (below) said: “It was very much a joint project between Lisa, myself and Helene Somerville, who is friend and fellow speech therapist. I’m the poet, who came up with the rhymes, but the three of us worked together to get the correct simplified language, key words and best sounds to go into it.

“The storyline is based around Baby Bear and it follows him though his daily routine – the idea is to show the parents how the sounds can be practiced through everyday activities. For example when Baby Bear is being fed the spoon becomes an aeroplane and it makes a fff sound as it flies towards his mouth, and when he is on a swing in the park he makes a sh sound. It goes all the way through, from getting up in the morning, right up until bedtime.

“It has been illustrated by Abi de Montfort, who is a friend of Helene, who wrote the book with us. We really liked the fact that she uses a technique called picture collage; although she draws large parts she collages in other parts of the picture so it appears real, for example, the towel in the bathroom or the bushes in the park are actual photographs.

“Because of the attractive pictures and the rhyme which runs through the book, it’s attractive to all children, preschool and early school age, and anyone who enjoys sharing a book.”

Although conceived in 2018, the recent publication of the book is timely in the face of the Covid pandemic.

Mrs Farquhar said: “Face to face contact has been reduced but, because of Covid, we have to wear masks, can you imagine children not being able to see mouths and the shape of the lips and facial expressions? They are not getting the information they need to develop their speech.

“We actually started writing it two years ago but, because of Covid, it has proved to be very timely as we went into Covid and appointments were reduced and face covering came in.”

As the book, published by Burton Mayers Books, is available on Amazon it is already reaching a worldwide audience.

Mrs Farquhar said: “We had a message from the lead of a cleft team in Nottingham reporting the case of a little boy who was not very engaged in therapy but his nursery has been using the book with the whole class and he came into therapy using some of the sounds from the book which they had never heard before.

“It’s also available in America and there’s a lovely review from a US speech therapist who is using it and is finding it really helpful, so it does seem to be going far and wide, which is lovely.”

All proceeds from the book will go towards publishing a follow up to address further sounds.

Mrs Hoccom said: “Any profit we make from the sale of the book is going to be invested back to allow us to write another book – the first book targets four of the main sounds but there are plenty more so we want to do another book to cover the next set of developmental sounds. The aim is to have a series so the children will know all their sounds and have beautiful speech.”

Helen Extence, Lead Speech and Language therapist for the Welsh centre for cleft lip and palate, said: “I am thrilled to see this book on the shelves. Regular exposure to the book provides the opportunity to model speech sounds to the child. The more they hear the sounds the more likely they will repeat them.

“Lisa and Rhian, two of our Swansea Bay’s highly specialist speech and language therapists have lead the way in this project having been originally inspired by many of the families that we work with.

“They have created a beautiful child’s listen and look book which families can share and enjoy whilst developing early speech and language skills. It is a great achievement and I look forward to seeing the next book in the series!”