The National Elf Service has brought some festive cheer to young patients on the children’s ward in Morriston Hospital.

As it’s the busiest time of the year for Father Christmas, he could not make the journey to Morriston to meet them in person.

Instead Santa spoke to them via a live video link from his North Pole workshop – and arranged for some elves to be there to hand out Christmas presents on his behalf. 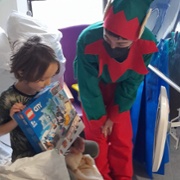 Children who were not well enough to go to the playroom where the link had been set up did not miss out either. The live feed was transferred to an iPad and taken to them in their beds.

The fun event was made possible by Swansea Bay’s Digital Services team and network supplier Cisco, which has donated presents to the young patients over the last few years.

Although Santa himself used to deliver the presents, the pandemic meant the visit last Christmas and again this year had to be virtual.

Presents were instead distributed by “elves” Rhys Tutton and Kieran Phillips from Digital Services.

Children’s services play coordinator Lisa Morgan said: “It was an excellent morning with smiles all round from the children and the parents.

“It was lovely to hear all the children singing along with Santa and the elves.

“Rhys and Kieran were wonderful, and fantastic with the children.” 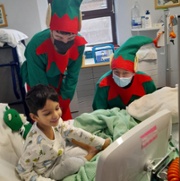 Sarah James, interim matron for children and young people, has now written to Cisco to thank the company on behalf of the play team and all the staff, as well as the youngsters on the children’s ward.

“We are extremely grateful. It put a huge smile on so many faces, and the generosity of presents were exceptional,” she said.

Cisco’s public sector account manager for Wales, Adam Sims, said: “After such a difficult year it’s so lovely to see the day be a such a success.

“The smiles on the children’s faces have made my year.”