Above: Two of the nurses turned poets, Deborah Morgan and Dawn Griffin

Three mental health nurses from Cefn Coed Hospital have turned to poetry to process their emotions of working through the pandemic.

Maria Anderton, Dawn Griffin and Deborah Morgan collaborated with Pembrokeshire-based writer Kerry Steed to create a collection of poems which communicates their experiences over the past 18 months.

The collection, The Close Language of Distance, is part of a project called Unlocking the Poetry: Sharing the Story, which aims to work with NHS Wales staff to articulate how Covid-19 has impacted upon them.

The nurses met Kerry via a video call to discuss their trials and tribulations before the poet transcribed their conversations and worked their words into what was described by Dawn as ‘the most beautiful collection of poems’.

Dawn (right), Swansea Bay University Health Board’s Directorate Manager for OPMHS, said: “I had to hold it together reading them because I was so emotional.

“We are so thrilled with the outcome. Kerry took so much from it, and turned something that was really challenging and emotional into something quite heart-warming and beautiful.

“I have shared the collection with family.  I am thrilled they can gain a sense of what I’ve experienced from the poetry.

“I was so worried in every aspect of my personal and work life, and wouldn’t show it.  So for others to read this, they were really touched by the poems.

“Going through something like the pandemic, we didn’t take a minute to step back and think about it. This opportunity has given us the chance to reflect and learn from it as well.”

She said: “When Kerry sent us the completed poetry, it absolutely blew us away. I get hairs on the back of my neck when I think about it. When I first read the poems I cried, it was just so powerful. I thought, ‘look at that, hear that, that’s what we went through’.”

As the pandemic intensified, Maria (right), who usually works in a management role, changed back into her scrubs and PPE and joined her colleagues on the wards, delivering clinical care rather than working from home.

She said: “For me, it was absolutely the right thing to do morally. You know we were all so scared. I had a family to go home to, the others had families to go home to. So it was a massively conflicting time.”

Her decision paid off as she felt part of a tight team.

“We rose to the challenge, with lots of support from the team and the community. We went from feeling like we were in the middle of the eye of the storm, and we were just floundering, to feeling like we had this whole team around us that allowed us to feel much stronger.”

Deborah, Derwen Ward Manager, expressed her love for one poem in particular as she felt strongly about her perceived lack of attention and support for the mental health hospitals during the pandemic.

She said: “I'd love to share the poetry, especially the one titled ‘For the Forgotten Hospitals, I am speaking’, because I feel very strongly that as mental health hospitals we are always forgotten. We are never mentioned in the media. They thought Covid wouldn't hit the mental health wards for some reason.”

Deborah admitted a need for psychological input during the pandemic, as she felt angry and began to experience nightmares following the loss of people’s loved ones that she had nursed for a long time.

She said: “When I went to put it into words I didn't feel so angry. Feelings came differently, so when it came to talking to Kerry I could look at the whole situation in a more positive light instead of that anger.

“When I read the poetry it just took me back to that place. But I just think it was because everything that I locked away again had come flooding back. But actually, the more that I read the poetry and understood it, the better I felt.

“I’d I just like to thank Kerry a lot, because the way she captured it took my anger away. It made me look at it more, it really made me look at things and made me realise what we have achieved.

“I don't think people realise that with mental health there isn't an open wound or something that you can heal or something you can operate on. People don't understand the real challenges that you have, so I think it’s important to talk about it.” 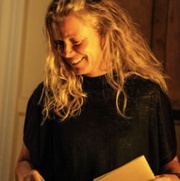 She said: “I think it's vital that anyone who's been working intensely through the pandemic has an opportunity to process that experience and to mark it, to give voice to it. I offered out the project by way of enabling that.

“During the hour we spent together they were listening to each other, sharing story and acknowledging the emotions that they had felt as they were going through Covid, emotions which perhaps hadn't been acknowledged between the three of them before.”

Here are two of the poems for your enjoyment.

The Lioness
Lioness, I had the pleasure
of working alongside you.

I remember your strength, Lioness,
such strength.

And how it was so tough, so challenging
internally panicking while showing
that leading lioness face,
while supporting, pulling everyone together.
Remember, Lioness, your strength in relation.

How frightened we really were
to keep people alive, frightened
to save them.

You remember, Lioness, how we felt?
Frightened, but such bravery
amongst that, such strength.

Be proud of that, be proud.

Lioness, I had the pleasure
of working alongside you
and remember, I say,
remember, Lioness, how you mattered.

We’ve Got This
The respect for each other totally changed, we showed respect, more care for each other. I think maybe it’s always been there, but when you’re working with people everyday, well, you don’t really see it, until you get something like this.

Something like this and you realise
how important the person next to you is,

nurses and senior management all sharing
on the same level, and the work
is everybody’s.

And the community sharing spirit,
the donations, the food.

How heartwarming, how humbling
how people are sharing,

even when they’re not there
you sense community.

and the next,
and how much you care,

and that’s when you know,
we’re doing it together,
we’ll get through this together,

and that's when you know,
we’ve got this.