Just when you thought he couldn’t rise any higher in our estimation, Welsh rugby’s captain fantastic goes and spends his time off visiting patients in hospital.

With the celebrations of a Six Nations Grand Slam still ringing in his ears, Alun Wyn Jones paid a surprise visit to the South West Wales Cancer Centre in Singleton Hospital Swansea.

The visit certainly raised spirits with one patient, Buddug Davies of Neath, saying: “I watched all the Grand Slam games so it was fabulous to meet them. It’s marvellous that they found time to meet the patients. I was all excited, I’m going to make a lot of people jealous.”

While Alex Chalmers said: “The whole family follows Welsh rugby and so it was really nice to see them. They look so familiar, I thought, ‘Where have I met you before?’ It was really nice of them to take time to come around and visit.”

And Jimmy Edwards added: “It’s marvellous to see them doing things like this, it cheers people up.”

During a tour of the wards the players were shown how Swansea Bay University Health Board staff were working together to cope admirably with the disruption caused by a recent fire on the hospital’s cancer care ward 12.

Following the visit Alun Wyn Jones said: “It was nice to visit the Golau cancer centre and the people affiliated with it. Everyone was really welcoming. We appreciate what a tough time it is for people having treatment. The attitude and resilience that people were showing, the support and help from the staff, and the general feel of the place, was a real positive experience for us and we tried to add to that positivity.” 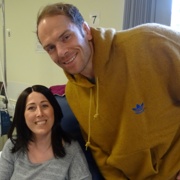 The Wales and British Lions star was keen to praise the important work SBUHB staff did.

He said: “I can’t emphasise enough how much good work the staff and nurses do here to try and deliver the right treatment and support for the patients.

“We were thankful for the opportunity to visit and see some smiles on the faces of staff and patients alike.”

“It was great to hear them chatting and laughing with the patients and we really appreciate it, thank you all.”