Please note, this photo was taken prior to COVID-19 restrictions.

From her very first day in training, Swansea Bay nurse Jean Saunders has had a career unlike most others.

While many begin nursing straight after school or university, Jean joined the profession at the age of 35, after raising her two children.

From there, she has risen through the ranks to become lead nurse for one of Swansea Bay University Health Board’s most unique departments: the health access team for asylum seekers.

Swansea Bay’s asylum seeker service works with individuals and families of all ages and countries of origin, to give them the same access to healthcare that everyone else has locally. It is often the first service that asylum seekers make contact with when they come to the area.

The team’s work doesn’t stop at health, however. They act as advocates for asylum seekers too, helping make sure different social needs are met, and going the extra mile to support their clients to live happy and healthy lives in Swansea.

And they raise awareness more broadly of the challenges people face accessing services while going through the asylum application process.

Jean is incredibly passionate about her job, and truly cares about each and every one of the people she has contact with.

Her years of dedication saw her being named both Community Nurse of the Year and RCN Wales Nurse of the Year in 2019 – a title she has actually held for two years, as the 2020 awards were delayed due to COVID-19 – and being awarded an MBE in the 2020 Queen’s Birthday Honours for her services to nursing and asylum seekers

But it’s taken a few decades of hard work to get to where she is now. 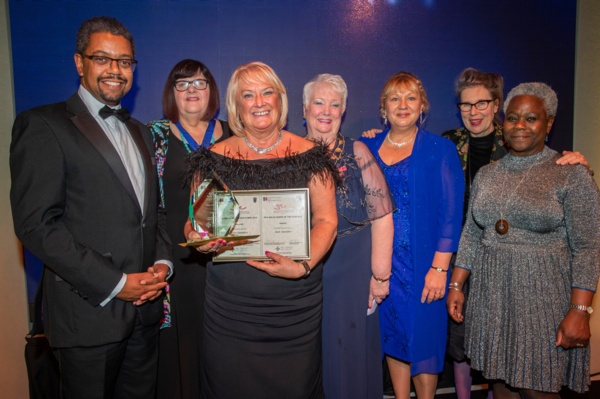 Right: Jean Saunders (centre, with her awards) at the 2019 RCN Nurse of the Year Awards.

“I had my children young and thought, right, now’s my time,” Jean said. “I was a single mum but my daughter was 17 and my son was 14 so they weren’t so dependent on me anymore.

“I started my training in October 1989 at Singleton – I loved every minute of it.

“But, when I finished, in those days we were clamouring for jobs. It was an awful situation in late 1992.”

Luckily, shortly after Jean completed her training, Singleton Hospital’s neonatal unit was given funding to expand, and she was offered a position there.

The neonatal unit is an intensive care unit for premature babies and babies who need support and care after they are born. They are often critically ill and very vulnerable.

Similar to other nursing roles, neonatal care can be very hard both physically and emotionally – but it was there that Jean continued to develop her favourite part of nursing: building deep, supportive relationships with parents and their babies.

“I had no experience in this area at all,” Jean said.

“It was extremely daunting at first, although you learn to deal with really intense situations.

“It is a privilege to support parents and their babies through such a difficult time in their lives, and also very rewarding.”

Jean worked on the neonatal unit for eight years, and it was only when a health visiting role came up that she chose to move on. The job was a clear next step in her career and one where she could continue supporting families long term.

Around 18 months in, Jean accepted a part-time secondment with the looked-after children’s team. This specialist health visiting service works with children who are in the care of the local authorities.

Jean’s positive impact in both these roles gave her a strong reputation across primary and community care as a dedicated and caring professional.

So, when the lead asylum seeker nurse job became vacant, she was an ideal candidate in many colleagues’ eyes – and has now been with the service for nearly 17 years.

Explaining her team’s work, Jean said, “Asylum seekers can have complex health needs. So holistic and person-centred care is essential to support their resilience and help them adapt to life in the UK.

“We are responsible for undertaking a health assessment of newly-arrived asylum seekers in Swansea Bay and ensuring they are allocated to a GP practice and can access healthcare services.

“In addition we provide screening for communicable diseases and immunise all adults and children over five.

“But it’s more than providing healthcare. We help with the social implications of being an asylum seeker too.

“We have close working relationships with partner agencies and are able to put our clients in touch with local support groups which help both with their emotional and mental wellbeing, and to integrate within the city.”

Asylum seekers face many barriers when trying to access services, for a number of reasons. Overcoming these is essential to them accessing effective care, and improving health and wellbeing.

These barriers can be simple things such as not knowing how to catch a bus or read a timetable. The team goes to great lengths to support their clients by providing visual aids such as maps, with photographs of the GP/dental surgeries, and landmarks in the city.

They also go the extra mile and look at the circumstances around individual situations, working with government departments, local agencies and voluntary organisations to create solutions to the difficulties asylum seekers often face.

Jean shared one recent example of a young patient who was due to go to Neath Port Talbot Hospital for a pre-op assessment, ahead of being admitted two days later.

“The family lived in Swansea – and had no financial means for transport to the appointment,” she explained.

“The team worked with partners to ensure that young person received the treatment they needed, and following discussions with partners a formal process has now been agreed for others in this situation.”

Like every other NHS service, COVID-19 continues to put enormous pressure on Jean and the team - but in different ways.

“Changes which have been put in place to allow easier and wider access to healthcare for communities have to be approached differently for many asylum seekers,” Jean said.

“Things like Attend Anywhere (a secure video call service for patients to attend appointments virtually) and AskMyGP (an online consultation system) these systems can create a barrier for our clients straight away, as many don’t have English language skills, or digital access.”

The team has adapted its service in response to these difficulties by liaising directly with GP practices instead. This has meant their clients have been able to continue accessing healthcare as they needed throughout the pandemic.

When COVID-19 first hit, the team found itself facing a huge challenge. Ninety-six asylum seekers who had been living in a hotel in Cardiff were relocated to Swansea when the temporary accommodation was forced to put its staff on furlough.

Normally, asylum seekers who come to live in Swansea have their health assessed by a member of the health access team shortly after they arrive.

With lockdown rules and social distancing, it wasn’t possible for this to be done - and with only 48 hours’ notice before this large group arrived, the team had to rapidly change their way of doing things to help those who needed ongoing care get access to it.

The team had to overcome a number of logistical issues, while lack of information sharing between organisations created further difficulties.

“There were some difficult conversations about what was needed to provide the service for this vulnerable group of people while still following all the rules around COVID-19.

“But we made contact with every single person in that hotel in the eight-week period we were given.

They also worked with Kingsway Pharmacy in Swansea to ensure any medication was dispensed according to GPs’ prescriptions, and then delivered it to the individuals who needed it.

It was a very difficult situation for both staff and clients, but Jean reflected positively on what they had learned.

“We worked through the problems – we were fortunate that we were experienced in delivering services for asylum seekers. We knew what was needed to ensure everyone’s needs were identified and met,” she said.

“And what we learned from this helped me then support colleagues in Hywel Dda when a similar situation happened in that area last September.”

For someone who has achieved so much, Jean is modest when talking about her role. She certainly loves what she does but is clear that it is not just about her – this work couldn’t be done without the team that makes up the service. Their passion and dedication is crucial to making sure asylum seekers live well in Swansea Bay.

“I often say to the team: if we don’t feel that our clients are getting what they deserve then it is up to us to challenge that. Unless you challenge people in the right way things will never change,” Jean said.

“We’re not going to be able to change every part of the process but hopefully we can raise awareness so that our colleagues and partners understand that there are barriers to accessing care for some groups of people, and a one size fits all approach isn’t always the most appropriate.”