Hospital's key workers put in the picture by grateful pupils

If a picture is worth a thousand words then they are all thank yous when it comes to this painting gifted to the staff of Morriston Hospital.

The stunning artwork was created by talented Bishop Vaughan Catholic School sixth former Emily Paradice-Ruan in a bid to thank key workers for the role they played during the heights of the pandemic.

The thoughtful gesture is particularly relevant as the Morriston-based school operated as a childcare facility for key workers during lockdowns with many of those who passed through its gates having parents who worked in the hospital. 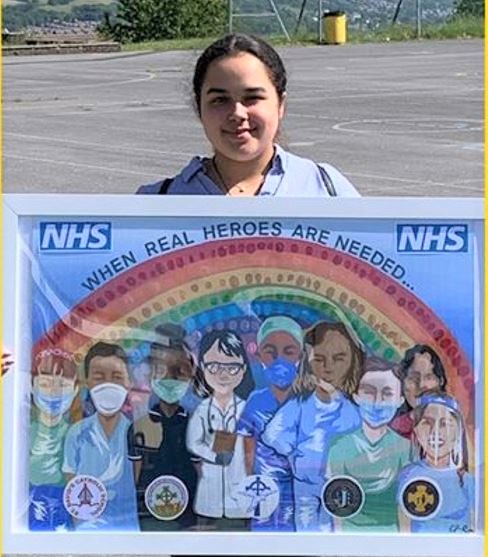 Emily (right), who has depicted the various roles carried out by NHS staff in her painting, enlisted the help of dozens of primary school pupils by getting them to leave their fingerprints in a large rainbow which makes up the background.

Emma Pole, head teacher at Bishop Vaughan, said: “We have very close links to the hospital due to the fact a number of our children have parents working there. We knew what they were going through and we wanted to present it and to say thank you.

“It’s intended to reflect the many roles which the health care sector were fulfilling during the pandemic and the fact that they were putting their lives on the line for us every day. They were certainly experiencing tougher and bleaker times than any of us could ever have imagined.”

Mrs Pole explained that the artist, who was very keen for the hospital to have the painting, had ensured as many pupils as possible had a hand in the work.

“As a school we were closed during lockdown but open as an emergency childcare setting, welcoming the children of those key workers each day.

“Those children contributed to the picture. The painting was something that Emily did in her own time and she came into school to do it in that childcare phase, with the children.

“Emily carefully formulated it so she painted key workers and those in different careers in the foreground with a rainbow in the back, as the symbol of the pandemic, and within it are the fingerprints of the key workers’ children.”

The painting was presented to the hospital by the school’s head girl and boy, Lauren Powell and Lloyd Thomas, as Emily is away at university.

Lloyd, as aged 17, said: “It’s quite special given everything that’s happened over the last couple of years. We are tremendously thankful for our key workers here at Morriston Hospital.

“This repays only a fraction of our gratitude for all the work they do here, we’d like to do a lot more. We just hope that this picture is a nice symbol of saying thank you.”

While 16-year-old Lauren added: “We just wanted to thank everyone for the incredible effort made by the Morriston team during the pandemic.

“I’m really grateful that we could show how thankful we are for all the key workers who risked their families and themselves during the pandemic. They are all just so amazing.

“I’m really glad I was able to see their reaction to the painting. I’m glad they liked it.

“I think it’s really special that the key workers’ children have their fingerprints in there because it shows how everyone was affected, and how we can all group together in times of need.”

The painting will be hung in the hospital’s main corridor, alongside a plaque noting the artist and school, so it is visible to all visitors.

Carol Doggett, Interim Director of Nursing at Morriston Hospital, said: “It’s an honour to accept this artwork on behalf of all the staff here.

“It truly recognises the journey we have been on over the last two years. I think it will go a long way towards helping us look at that and reflect on that journey, and consider how we move forward.

“The children have really captured the emotional response from the public during the times that we have had the waves of Covid that we have experienced and managed.

“Removing the wrapping off the package was very emotional. We didn’t know what to expect and were so pleasantly surprised.”