Healthy people’s poo could prove to be the secret weapon in tackling the twin epidemics of obesity and diabetes. 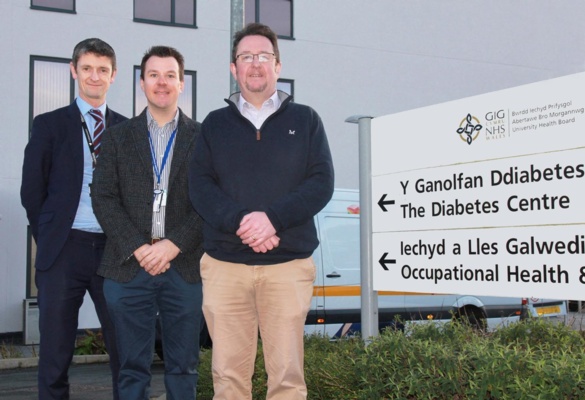 A research trial in Swansea will see microscopic organisms harvested from the faeces of healthy volunteers and transplanted into the bowels of people with type 2 diabetes who are also obese.

This has the potential to be a global game-changer by leading to weight loss and even to some people being able to stop taking diabetes medication – saving the UK billions of pounds in healthcare costs.

They are recruiting 30 people with Type 2 diabetes and obesity. Swansea University, meanwhile, is providing 30 healthy donors and ABMU is funding the research with a £40,000 grant.

Professor Harris said: “We began doing clinical trials looking at manipulating the bacteria and organisms that live in people’s gut in 2015.

“Initially we looked at patients with ulcerative colitis, an inflammatory bowel disease. We’ve been changing what the organisms are in their bowel and we’ve seen great results.

“Two-thirds of patients have improvements in their symptoms without needing any medication with this therapy, and there’s great interest in applying the technique into other disease areas.”

Professor Harris said there was evidence that such treatment could help patients with a range of conditions, including diabetes and obesity.

To date there has been only one equivalent study into this, conducted in the Netherlands and involving a smaller number of people.

“It found that changing the organisms that live in people’s gut was associated with an improvement in diabetes control,” said Professor Harris.

“We were very keen to look at this ourselves in Wales and see if we could improve upon that study in a bigger number of patients.”

The clinical trial is open to people aged 18-70 who have been diagnosed with Type 2 diabetes within the last two years – so their condition is potentially reversible – with a Body Mass Index of between 30 and 40.

Professor Harris said: “We will be taking samples from their faeces to study all the organisms that live within it, because we know that these conditions are associated with alterations in certain bacteria that we can then target.

“We’re also recruiting healthy volunteers from Swansea University to donate their organisms from their faeces and from their gut.

“This can then be associated with health improvements.

“We know in patients with diabetes and obesity that their gut organisms are over-efficient in extracting energy from their food, so you have a greater number of calories absorbed from a given meal than somebody who doesn’t have those conditions.

“If we can change the bacteria and organisms in the gut, they won’t absorb so much energy and, therefore, we’re hoping weight loss can be seen and also tighter control of diabetes can be seen.

“It may even be possible that people who have just been started on diabetic medication can come off their tablets.”

The donors will be rigorously screened to ensure there are no infectious diseases present; the screening is more rigid than it is for blood donors.

Mr Cunningham said: “We have very specific techniques for extracting the organisms from the donor’s stool.

“We collect the bacteria some weeks in advance. It is deep frozen and then thawed on the day when we actually do the transplant.

“It’s in liquid form and injected through a tube in the patient’s nose. There is no smell or taste associated with it – it’s all very purified.”

The study will be conducted over the next 12 months. For control purposes, some of the patients will receive the “healthy” bacteria and others won’t, with the results for both sets carefully studied.

Professor Stephens said: “We’re very excited about this. There’s no other studies in the UK or even Europe going on into this at the moment.

“Given the global health problems of diabetes and obesity, this could be a real game-changer.

“If it goes the way we hope, we would seek further funding for a much bigger trial to study it on a wider basis.

“This would look at patient satisfaction scores and also include a health economic evaluation because this could potentially save the UK economy billions of pounds in healthcare costs.”

David Johnston from Swansea became aware of the study through an information pack which his GP surgery sent him. After reading it, he decided to volunteer to help take the research forward.

He said: “Diabetes is a very restrictive condition as a lot of the food and drink I once enjoyed can cause me serious harm.

“Type 2 diabetes is largely self-inflicted. The most effective treatment also comes from yourself by controlling your diet and increasing activity levels.

“However, this can be difficult due to high time pressure from work and life in general.

“This study could lead to a way to help better control diabetes if our diet and exercise control 'slips' every now and then, which can be nothing but a good thing.”

*Patients potentially interested in the study can contact the Joint Clinical Research Facility in Swansea on Tel: 01792 703722.