An innovative approach to providing children from some of Swansea’s most disadvantaged areas with the best possible chance in life has been shortlisted for a further national award.

Swansea Bay’s Primary Care Children and Families’ Wellbeing team has already been shortlisted in the NHS Wales Awards 2019, for its work to reduce the impact of adverse childhood experiences in one of the most deprived areas of the city.

But now it finds itself shortlisted for a Royal College of General Practioners Wales award for an expanded version of its programme.

Initially the programme addressed concerns in the Penderi area of Swansea after GPs noticed that large numbers of families were attending practices for concerns linked to parenting, anxiety, wellbeing, developmental and behavioural issues. 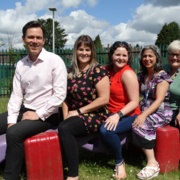 It was reported that, on average, parents visited their GP practice six times about the same concern relating to their child. GPs, however, were left frustrated that there was little or no option over where to send parents who came to see them.

As a result the Penderi Cluster (made up of six surgeries or medical groups from the area) allocated substantial resources, co-funded by both Swansea Bay and Swansea Council, to develop a Penderi Primary Care Child and Family Wellbeing service.

Their early years’ workers are able to offer up to 12 in-depth sessions, designed to deliver an innovative, integrated approach to supporting the needs of children under 11 and their parents/carers and families in their own homes.

Following the first phase of the project, all participants showed increased levels of wellbeing, improved confidence, resilience and better relationships.

It resulted in a reduced inappropriate demand, with more than 700 GP appointments being saved and 100 per cent of families reporting that they would access the service before the GP, if they were to experience similar problems again in the future.

One parent said: “Overall, I am now more positive and less anxious, less stressed out and more optimistic. I am looking forward to continue developing and changing strategies as we move forward as a family.”

The project also led to avoiding or minimising adverse long-term health and social care outcomes, for example, prevention of a child being taken into foster care.

Dr Daniel Sartori, Penderi Cluster lead, said: “Doctors are delighted with the results of the new service. Before these roles were created, GPs had little or no option over where to send parents who came to see us because they were worried about parenting. We felt frustrated because we had nowhere to refer them.

“It has been such a success in our area. I hope it will be taken up by local health boards as a model for other areas.”

Such was its success, two other clusters in Swansea, Cwmtawe and Llwcwhr, agreed to fund this service for their areas resulting in 284 referrals, equating to 991 beneficiaries being supported with 100 per cent of families reporting an improvement in all areas of their wellbeing.

Debra Morgan, a Swansea Bay planning manager for primary care, said: “This is a fantastic service that is having a really positive impact on the health and wellbeing of children and their families.

“Partner organisations have worked collaboratively to provide a seamless service that worried parents can access easily for help and support. The support is provided within the family home and feedback has been unanimously positive.  The service is proving invaluable for families and for the wellbeing of future generations.”

Swansea Bay’s cluster development manager, Tony Kluge, said: “It’s a real honour to be shortlisted for these awards in their first year. Our delivery team and our clusters have worked incredibly hard to do no less than help families in need to change their lives and provide a route for supportive services for the GPs in the area.

“It’s a pleasure to be part of such a transformative service which really addresses patient needs early on.”

The winners of the Royal College of General Practioners Wales Awards will be announced in a gala dinner in Cardiff on 15 October.