Coloured lights and high-tech glasses are giving patients with breast cancer direct control over part of their treatment at Singleton Hospital.

They have to breathe in or out until they are in the exact position required for radiotherapy to accurately target the treatment area, but without risking damaging surrounding tissue.

Traditionally, it was achieved by radiotherapy staff at Singleton’s South West Wales Cancer Centre instructing patients to inhale or exhale until they reached that optimum point.

And if they moved during treatment, staff had to manually halt the radiotherapy beam until the patient was correctly realigned.

But all that is changing thanks to a multi-million-pound investment in new scanning and radiotherapy technology at Singleton. 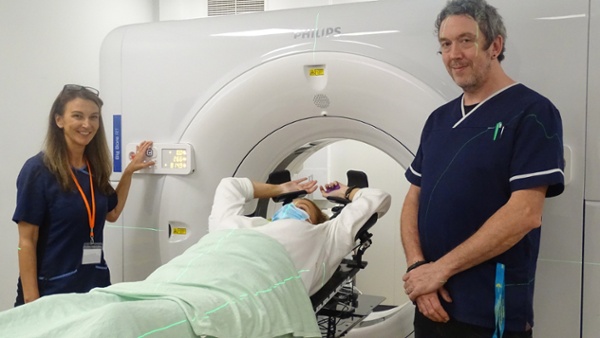 Patients are scanned using the radiotherapy department’s CT scanner, which was bought last year and has recently been upgraded to include a system known as Sentinel.

While CT scanners create a 3D image of the inside of the patient’s body, Sentinel uses cameras to map the body contour.

Radiotherapy Services Manager Nicki Davies explained: “The CT scan looks at the inside of the body, while Sentinel maps the body contour.

“That way we know when the patient is in the correct position for their treatment plan.

“CT staff will coach them to breathe. Patients can wear special glasses with a bar that moves until they are in the correct position.

“Staff can determine at that stage whether patients can manage it. That way, we don’t have to do all the planning and then find out it isn’t suitable for them and begin the process again.

“And most patients are far more relaxed by the time they get to treatment because they’re aware of everything that is going to happen.”

The hospital has four linear accelerators, or linacs. Three can deliver what is known as surface guided radiotherapy (SGRT), using the body contour mapping obtained at the scanning stage.

SGRT means that if the patient changes position even by a fraction of a millimetre during treatment, the linac automatically stops, preventing damage to healthy tissue surrounding the tumour.

“Previously we would watch and we would press a button every time they moved,” said Nicki.

“Now it’s not about how quickly we can press a button. The machine knows when the patient is moving and holds the beam until they are in the right position again. It’s much faster than human reflexes.”

During radiotherapy, patients have a range of options to help them control their breathing. They can either wear the special glasses to visualise when they are in the correct position, or do so using an iPad.

However, one of the radiotherapy rooms has been fitted with a special lighting system which has an even greater visual impact.

“The entire room changes colour for the patients,” said Nicki. “It’s blue before they breathe in. It’s green when they are in the right spot and red if they breathe in too deeply.

“Patients tell us they like it because they are more involved in their treatment. Rather than somebody saying to them, breathe in, hold it, breathe out, they basically have some control.”

And there will soon be another important benefit for patients, this one more psychological.

When they have their CT scan, they are tattooed with three dots which are then lined up on the linac to ensure the dose is accurately targeted. But the new technology is making this redundant.

“We are now looking towards losing the tattoos,” said Nicki. “Obviously that is going to be a huge step for them psychologically, in terms of not having a permanent reminder of what they’ve been through and the treatment they’ve had.”

Left: The entire room now turns green when the patient is in the correct position to receive surface guided radiotherapy, or SGRT

Sentinel has been utilised initially for patients receiving radiotherapy for cancer of the left breast, where the heart is located.

It has also been used for those receiving SABR, Stereotactic Ablative Radiotherapy, a highly-specialised lung cancer treatment previously only available in Cardiff until Singleton introduced it in the spring of this year.

Nicki said: “We have concentrated on those patients who will benefit from it most. But it will roll out to other forms of cancer.”

SABR aside, Singleton has been able to offer many other forms of highly specialised cancer treatments.

Last year, for example, it became the UK leader in the use of Intensity-Modulated Radiotherapy (IMRT).

For the majority of cancers this is considered the best and most effective form of modern radiotherapy available.

It directs a higher dose of radiation more closely at the tumour while simultaneously sparing surrounding tissue.

This is thanks to staff expertise coupled with significant investments in equipment and software over the last five years.

The linac that went live earlier this year replaces an older model – in fact it was the oldest still being used in the UK.

Singleton’s second-oldest linac is also reaching the end of its days. Building work is now under way ready for its replacement to be delivered early next year. It is due to go live in the summer, after commissioning.

The new machines between them cost £8.5 million, with other associated costs on top. Once the new one is operational, all four linacs will offer surface guided radiotherapy.

“Obviously the more machines we have with this technology on it, the more patients we can treat,” said Nicki. “We will also have four fully matched machines, which will make a big difference.

“If you don’t have matched machines and one breaks down or you need to service it, it’s very difficult to move patients to another linac.

“When it has happened before we didn’t cancel treatment. Staff worked extended hours for a couple of days until we had treated every patient.

“Now, if we come in in the morning and an element of the treatment machine is broken, we can move patients around quite easily. It reduces the impact, because we have a lot more flexibility in terms of capacity.”

The department has worked closely with Sentinel manufacturer Vertec, which has donated a light system and provided a second at a reduced cost. This will be installed on the new linac going live next year.

The Singleton team also hosted a training day, to demonstrate the new equipment and give talks to staff from other centres.