An emergency department nurse has created heartfelt care packages for children as a way of comforting them following the loss of a loved one.

Natalie Williams, who is based in ED at Morriston Hospital, Swansea, has designed the age specific bereavement boxes to give to children who have experienced the loss of a parent or sibling.

There are three sets of boxes; one for children aged under seven, and another for those aged seven to 11, both of which contain two teddy bears, an electric candle, a photo frame and forget-me-not seeds.

Children aged 12 and over will be given a memory box instead of the teddy bears, in addition to the other thoughtful contents.

“In the Emergency Department we are always working hard to ensure we can provide the best care and support to our patients at difficult times,” Natalie said.

“We take pride in being there when we are needed most.

“I’ve always been passionate about bereavement support but we didn’t really have anything we could give to children for long-term support when they go home.

“The idea developed so that if we have any children that lose siblings or parents in the department, we now have a support network and we can offer them something to take home and read, as well as a keepsake in memory of their loved one.” 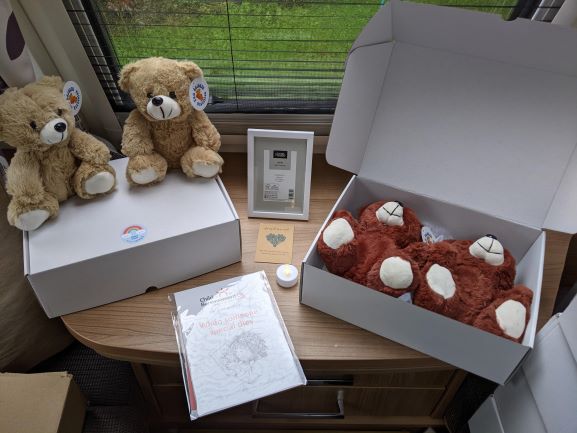 Pictured: Examples of the bereavement boxes for those aged 11 and under

Natalie initially paid for the bereavement boxes herself but has since received sponsorship from trade union Unison, enabling her to provide the service at no cost to herself.

It has also allowed Natalie to offer a bigger and better selection of keepsakes and support inside each box.

She added: “Unison very generously offered to fund the project which kind of put my idea into motion. They enabled me to make something so much better than I had hoped.

“I wouldn’t have been able to include the memory boxes or photo frames and I’ve managed to get bigger bears because of their support.

“I just want to say a massive thank you to Unison. They saw where I wanted to take my project but it wasn’t something that I would have been able to fund myself for the quality and quantity of the things I wanted to present.

“I’m so grateful to the Emergency Department for supporting my ideas and projects and always being so encouraging and for developing such a high standard bereavement service, led by Karen Thomas, that I’m proud to be a part of.

“It’s nice that as staff we can contribute and try to hopefully make a difference to people.”

Despite all of the hard work that has gone into creating each bereavement box, Natalie said that, in an ideal world, they would never have to be used.

“But I’m hoping that if they do, then they will provide bereavement support, not only while the children are in the department but in the longer term as well,” she said.

“I’m hoping each box will make a small difference in what could be one of the worst days in a child’s life.” 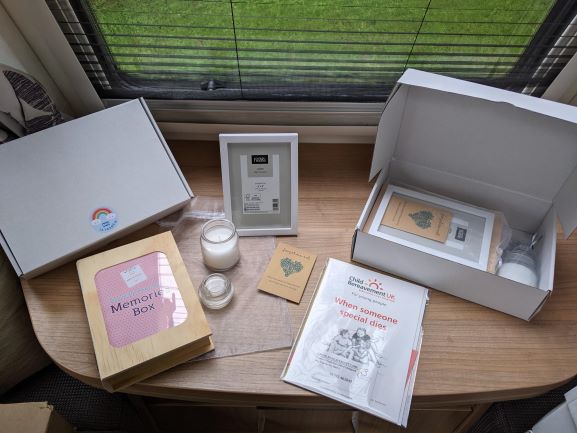 Pictured: The bereavement boxes for ages 12 and over which contain a memory box

Lynne Haeney, Service Manager for Emergency Care and Hospital Operations, said: “It came to my knowledge that Natalie had been providing this service to bereaved families through her own funds.

“So through my excellent links with Unison I approached them and asked if they would be happy to sponsor her to continue this service and improve on it.

“Unison were more than happy to support Natalie as they could see and understand the benefit of the packs that Natalie was preparing.

“Without their support Natalie would have continued to supply this service with her own funding.

“Unison understood that nobody should have to do this and be financially penalised for trying to support our bereaved families.

“Following conversations with Unison, they immediately made funds available to Natalie and have explained that they will be happy to support this annually if it’s needed.

“This is an excellent demonstration of the health board’s values and working in partnership with our union colleagues.”

Andrew O’Leary, Unison Swansea Bay Healthcare branch secretary, added: “Unison members are often called upon to work with people when they are at their most vulnerable.

“When approached, our branch committee were very happy to support this local initiative, seeking to give some additional comfort to children suffering a bereavement.”