A groom spent what should have been his honeymoon 2,000 miles away from his wife because of a very different matter of the heart.

After he returned home, his long-term fiancée Rachel told him he should celebrate his recovery by fulfilling one of his dreams.

Main photo above: Dai at the summit of Mount Toubkal 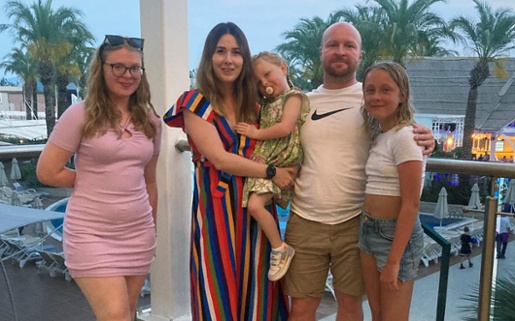 So Dai booked a trip to climb North Africa’s highest mountain and raise money for the Cardiac Centre too.

Then he and Rachel decided to tie the knot. For unavoidable reasons the date they settled on was just two days before he was due to depart for Africa to climb Mount Toubkal in Morocco.

Although Dai wanted to rearrange the trip, Rachel insisted otherwise. And so, with her blessing, he flew off to complete the challenge 48 hours after the couple’s wedding ceremony.

Dai with wife Rachel and daughters Poppy, Erin and Evie

The swimming pool engineer has always kept physically fit but his life changed dramatically when he went for a run during the first lockdown.

“I’d only gone about a quarter of a mile up the road and I couldn’t breathe properly,” said Dai, dad to daughters Poppy, 13, Evie, 11, and four-year-old Erin.

“I came home and told Rachel there was something not right. She told me to go to the doctor.

“He gave me a test and said I had a very loud murmur. He wanted it checked out.

“Between then and him getting me an appointment, I woke up one morning and I couldn’t get back to sleep. There was no pain but something just didn’t feel right.”

Tests at Princess of Wales Hospital, Bridgend, showed an aortic aneurism. This is a bulge in the wall of the aorta, the major blood vessel carrying blood from the heart. It can rupture, causing life-threatening bleeding.

After spending three days in the Bridgend hospital in September 2020, Dai was transferred to Morriston’s Cardiac Centre, ready for planned surgery to be carried out a few days later.

However, on his arrival in Morriston Hospital an Echocardiogram (ultrasound of the heart) showed pending rupture aneurysm with fluid around the heart, which needed an emergency operation.

“Because we were in lockdown I wasn’t allowed any visitors,” Dai said. “When I first asked if Rachel could come and see me, I was told nobody was allowed unless it was to say goodbye.

“That put everything into perspective. I hadn’t seen my daughters for a few days. I had that feeling of, am I ever going to see them again?”

Consultant cardiothoracic surgeon Aprim Youhana not only removed the aneurism but also found a defective valve, undiscovered since birth, and replaced it with a tissue valve.

Dai spent two days in cardiac ITU, then was transferred to a ward where he remained for a week before being allowed home.

Then, two months later he developed endocarditis, an infection in the valve, and spent three weeks in Princess of Wales Hospital.

Although he was back in Port Talbot in time for Christmas, the family were unable to have any visitors because of the risk of infection.

“After all that was done, Rachel said you almost died twice in the last couple of months. If there’s anything you want to do in life, you need to go and do it. You don’t know what’s around the corner.

“I’d always wanted to climb a mountain so she said book it – book it tonight. I won’t come with you but you’ve got to be with a guide.

“I wanted to do Mont Blanc in France first but I would be in snow and I hadn’t done a mountain that big before. So I went for Mount Toubkal and booked it for September this year.”

In the meantime, he and Rachel decided to get married. They wanted an early autumn wedding but as Covid-19 had created a backlog, the best date available was just two days before Dai was due to fly to Morocco.

“I offered to change it but Rachel said no, just go and do it. She was really supportive. I don’t know what I’d do without her, to be honest.”

And so Dai spent six nights in Morocco, with the ascent and descent of Mount Toubkal – 4,167 metres high – taking place over two days. 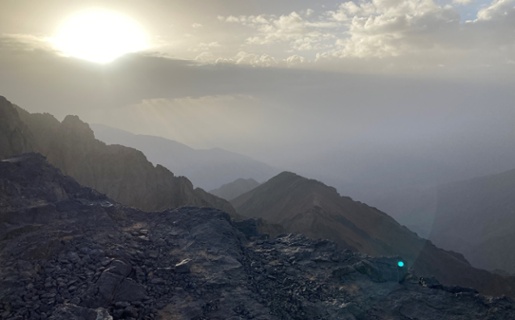 He and the other climbers were collected from Marrakesh and driven the 60-odd miles to the base of the mountain.

Summit sunrise: the view from on top of Mount Toubkal

“We walked from there up to base camp. That was about seven and a half miles. We had tea in base camp and then we slept there.

“We left then early in the morning and went up the mountain. It took us about four hours to get to the top.

“It was harder than I thought it would be. It wasn’t a straight walk. There was a lot of climbing, bouldering, scrambling. It was pitch black as well because we left at 3am to get up there in time for sunrise.

“We then spent the whole day walking down. At the end I was delighted with myself because I did it. But when it came to around 7.30pm that night and we were all sitting, having food and talking, I said I had to go. I’m knackered.”

The rest of his visit was spent on a road trip with highlights including a camel ride and sleeping under the stars in the Western Sahara.

Dai funded the entire cost of the trip from his own pocket, but asked for donations for the cardiac ITU at Morriston – raising £1,100.

“They saved my life and I just wanted to give something back,” he said. “Mr Youhana is such a humble person and the staff and the care they provided … it was just amazing.”

Not long after returning to Port Talbot, Dai was off on his travels again. This time with Rachel, as the couple enjoyed a honeymoon in Naples.

Apart from climbing mountains, Dai, who recently celebrated his 40th birthday, has also marked off another item on his bucket list – albeit a less physically challenging one. 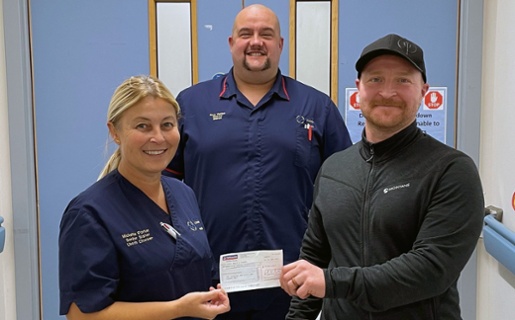 “They have lost so many since Covid hit and they are on the lookout to get more members into their ranks.”

Dai has since returned to the Cardiac Centre to hand over the donation.

Surgeon Mr Youhana said: “I am really delighted to see Dai looking so well and enjoying excellent quality life with his beautiful family after a major heart operation for such a life-threatening heart condition.

“Thanks to the team at Princess of Wales Hospital who made a quick diagnosis and the excellent care from team of our cardiac ITU, which contributed to his speedy recovery.

“I would like to thank Dai and his wife for their generosity to give up their honeymoon for him to raise funds for the cardiac ITU. I wish them all the best.”

Cardiac ITU matron Ross Phillips added: “I would just like to say a massive thank you to Dai and everyone who sponsored him.

“Considering his surgery, his feat is unbelievable. The money raised will be put to great use in benefiting future patients.”