Climber's recovery from cliff fall to conquering the Alps

A keen climber has praised the care he received from Swansea Bay staff which helped him conquer three mountain ranges just a year after he suffered multiple fractures in a cliff fall.

Loic Menzies was enjoying the final day of a climbing trip in Pembrokeshire when disaster struck.

He fell 13 metres while climbing St Govan’s Head, striking a ledge on his way down to the ground.

It left him with six fractures in his pelvis, spine, wrist and lower back, while he also suffered internal bleeding.

But thanks to the care and treatment in Swansea Bay, and follow up appointments at Addenbrookes Hospital in Cambridge, Loic was back climbing moderately three months later, and mountaineering soon after that. 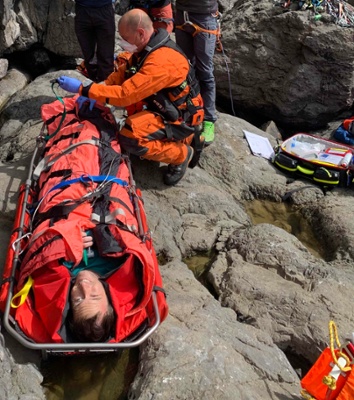 However, his biggest accomplishment came a year after his fall, when he climbed the Austrian, Dolomites and French Alps.

That, he says, would not have been possible if it wasn’t for the care he received.

After he fell from the cliff, the 37-year-old was flown by Welsh Air Ambulance to Morriston Hospital, where he spent the next four nights.

Loic said: “Miraculously, the x-rays and MRI scans I had in the Emergency Department confirmed that none of my fractures were displaced, so I was lucky in that sense.

“My first night was pretty strange in that I was processing what had happened and, at the same time, I couldn’t move myself around the bed.

“I had an incredibly kind nurse looking after me, and somehow she managed to make me feel a lot less scared and lonely. That matters so much in a situation like that.”

After regaining some movement, Loic’s recovery stepped up a notch after starting his rehabilitation.

He said: “My confidence had been boosted when I got some mobility back and met the physios.

“Despite having six fractures, they said they were going to get me walking.

“I was surprised but I'm always up for a challenge and was determined to recover as quickly as possible, so I followed their instructions and hoisted myself up on the Zimmer frame.

“It turns out that being generally fit and training hard really pays off in these situations and soon I was hobbling down the corridor.

“That early success spurred me on to push further, and the physios encouraged me to get onto crutches instead.

“I soon had a big grin on my face as I took my first, somewhat painful, steps.”

Despite worrying his climbing days might be over, step by step his recovery proved quite remarkable and inspiring – particularly for his fellow patients.

They too played a big part in his rehabilitation, providing a sweet incentive that helped pave the way for his return home to Cambridge.

Loic said: “In order to be discharged, I needed to be able to get up the stairs, so the physios' project the next day was to help me conquer that.

“It involved teaching me a new way of doing so on crutches which was pretty challenging, but I was delighted to discover it was possible. I could already feel the progress and that was enough for me to envisage a proper recovery.

“The elderly ladies on the ward helped me too. They taped sweets to the window at the end of the ward while I was asleep to encourage me to walk a few extra steps, which was a really nice thing to do.

“It was totally worth it as they rewarded me with a big cheer when I’d done it.

“The next day I was sent home to Cambridge to continue my recovery there.”

Loic added: “It was really important to me to have a set of goals along the way - climbing by Christmas, mountaineering by Easter etc. 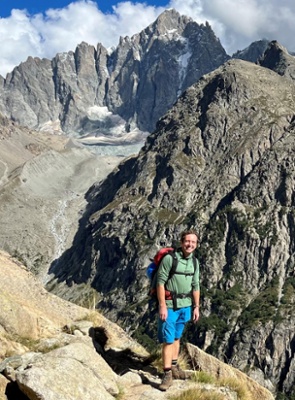 “The doctors very quickly reassured me that I'd recover, and the quick wins that the physios helped me achieve at Morriston Hospital gave me the confidence that I would be back at it relatively soon.

“Given that climbing is such an important part of my life I'd have been devastated if I couldn't have gone back to it.

“What's really surprised me is that I've got almost no lasting pain.”

He added: “On a slightly different front, there was a big risk that psychologically I might have found it hard to get back on the rock.

“That's where the softer side of human care made a difference. They made the experience much less traumatic than it could have been.

“I admired the professionalism of people's ability to understand me as a person, including what would motivate me and how much to push me.

“It really showed me how all the different parts of the system work together and how everyone makes a difference - whether it be the member of staff offering you some extra soup or the nurse handing over key bits of information at the end of their shift.

“As in any big organisation, people will get frustrated with the mechanics of it all, but when you take a step back, it really is an extraordinary machine full of brilliant people.”