Just one year ago, keen photographer Ashley Lovering had to be carried up the steps to his apartment because he was too poorly to climb them.

Ashley had spent 16 weeks in hospital after a freak accident that left him with life-changing injuries.

But thanks to his physiotherapist he can now manage those stairs.

While he was well enough to leave hospital a year ago this month, he is far from fully recovered and some everyday tasks are beyond him.

But the 64-year-old retired chauffeur has nothing but praise for the hospital staff who cared for him and continue to support his recovery.

In April last year, Ashley was out near Morriston Hospital, taking photographs of trucks for his popular Facebook page when he fell against the side of a passing van. 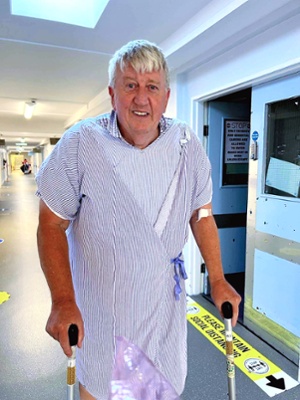 Ashley was initially treated in Cardiff before his care was transferred to Swansea Bay.

“I spent 16 days in Ward W in Morriston Hospital,” he recalled. “The food, treatment and company provided by everyone there was tremendous.

“Having never been in hospital before it was an entirely alien environment to me, and I would not have survived without the care I received

“As I was put into a back brace, I was totally helpless and relied on the wonderful nursing staff for the most basic functions.

“As this all occurred while Covid restrictions were in full force. I was unable to receive visitors and I spent most of my time in my room. I found the staff became my family and this lifted my spirits enormously.

“I will never forget the kindness and love shown me from each person, irrespective of their position.”

Ashley was moved to Gorseinon Hospital but returned to Morriston after an infection was detected in his leg.

He said: “I remember being quite worried about potentially picking up a nasty bug and the damage it could do to my leg, but a young nurse called Demi-Louise Baron really helped me.

“I broke down but she brought me around to a positive way of thinking and I will never forget our chat as I was in such a dark place.”

He spent more than two months in Ward W in Morriston. Again, he said, all the staff there were excellent.

“I came across so many wonderful people and can’t remember all their names, but matron Claire Williams oversaw the wards I was in and she was fantastic,” said Ashley.

“I cried in each hospital not because of pain but for the love and care I had received from so many special people.

“They worked very hard to see everyone was looked after even when they appeared to be short-staffed.”

A year after returning home, he continues to receive follow-up treatment at Morriston, Singleton and Neath Port Talbot Hospital. 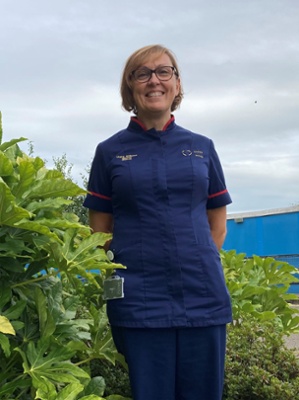 Despite the limitations resulting from his accident, he continues to have a positive mind-set.

He said: “There are many things I can’t do now like washing my hair, back and feet. I cannot get things out of cupboards or clothes off rails.

“The pain does not go and it is tiring, but I’m still receiving tremendous follow up treatment.

“It has been a hard year but my wife, as always, has put me first and has helped me over many hurdles.

“I am not the same man who went into hospital on April 21, 2021, but I have learned a lot about enjoying life.

“I am lucky that I can take photos of a passing boat, for example, from my apartment which is something I really enjoy.

“I’ll always be thankful that I can do that, and that’s because of the amazing treatment from the hospitals, paramedics and ambulance crews who treated me immediately after my accident.

“I have 35 steps leading up to my apartment. When I got home I had to be carried up them by two ambulance people.

“About 10 days later Alex Dolan, the physiotherapist, came. She worked on my arms and legs and after a month we started doing the stairs.

“Alex had a certain way of getting me to do exercises, and learn to walk with crutches, Zimmer frames and sticks, which I still use.

“I can get up the stairs on my own now, holding the handrail and supported by sticks. It was a big thing for me.”

As part of his ongoing recuperation, Ashley also had physiotherapy in Morriston Hospital and hydrotherapy in Singleton.

He added: “I have written to the health board’s CEO Mark Hackett to let him know about my care, and for him to thank all the teams involved.

“It’s important for staff to know their work is really appreciated.”