The response to many of the challenges faced throughout the last 18 months saw leadership and team work play crucial elements in many NHS roles.

But for Swansea Bay appraisal and revalidation manager Sharon Penhale, those skills had become second nature long before the pandemic arrived after spending the last nine years serving in the Army Reserves.

Sharon is a Lance Corporal with 203 (Welsh) Field Hospital, which is one of 10 Army Reserve field hospitals and provides up to 200 beds when fully manned.

The field hospital recruits solely from within the boundaries of Wales.

“It’s a bit like a human resources role where I oversee staff and I make sure they’ve got the information they need on their personal records. 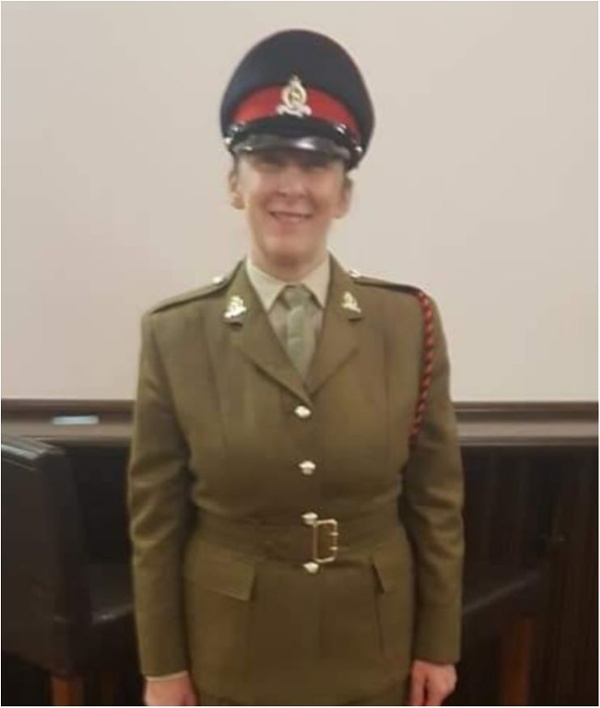 During her time with the Reserves, Sharon has taken part in countless training exercises and courses that have seen her bring valuable skills back to her day job.

As well as gaining confidence and resilience, she has even progressed into her current role as a manager, which she puts down to her Army experiences.

Sharon, pictured left, added: “It has certainly helped to build my confidence in my career working in the Executive Medical Director’s team.

“My experience has helped me obtain my management role. Prior to that I was a support officer to the appraisal and revalidation manager and prior to that a personal assistant in the Medical Director’s department.

“You have to give presentations in the Army which has helped me with that skill in my NHS role as I have to provide training to doctors.

“I think the Reserves has definitely pushed me out of my comfort zone. Being put in difficult situations has helped me to improve and develop as a person, as well as in my career.

“It is challenging but I think it’s good to be out of your comfort zone sometimes. That’s what the Army Reserves offers and it instils a lot of resilience in you as well.”

Sharon recently took part in a two-week adventure training camp in Caerwent, in Monmouthshire, which saw those attending staying in a field and taking part in team building activities.

The annual event acts as a way of putting skills and knowledge learned throughout the year into practice through a variety of exercises.

“We stayed for five nights in the field. Initially we were inside a hangar and all slept on camp cots where there was no shower or electricity.

“We were doing build-up training where we were refreshing our skills on how to work as a section before doing a final platoon attack, which was at night.

“There are certain criteria in the Reserves where you have to complete 27 days which includes an annual camp, as well as mandatory learning.”

Sharon aims to further progress her Army career by becoming a corporal and ultimately hopes to experience a deployment.

She believes the similar values shared by the Army and NHS meant they were able to work well together at a difficult period during the pandemic. 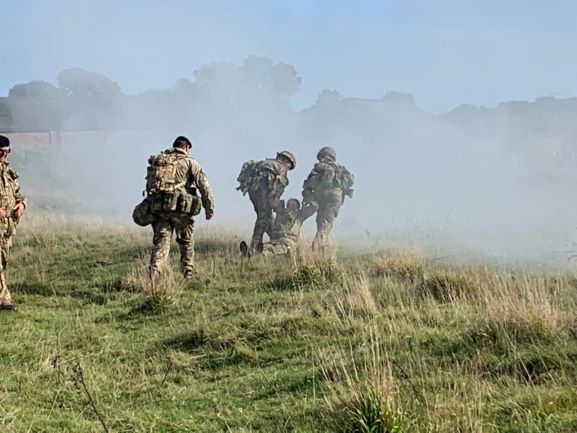 Pictured: A training exercise during the two week camp

Sharon said: “Eventually I would like to experience deployment, whether that’s something in the UK or overseas because there are lots of opportunities available during Covid, for example, supporting vaccination centres.

“The last 18 months goes to show how the leadership in the Army has helped to drive and help health boards set up field hospitals. Those skills have been brought into the NHS and showcase what the military can do in a short turnaround.

“Hopefully when I have the opportunity to undertake my corporal’s course, this will incorporate leadership within the course which I can bring back to the NHS.

“It’s completely helped me grow, as well as benefited my career.

“If anyone is thinking about joining they should look at opportunities available and join the Army Reserves. It opens up doors and opportunities for you which help you progress in your career and personal development.”

Alastair Roeves, Interim Deputy Medical Director at SBUHB, said: “The benefits to the health board from Sharon’s commitment to armed services are many.

“Although her training takes her away from her desk job, she returns to Swansea Bay with increased confidence in people management and problem solving. These are critical skills for transforming and improving services for our staff and the population we serve.

“It is also good to see and hear how much she enjoys this army role.”

“The relationship of employing reservists in the workplace are beneficial to civilian employers, the Army Reserves and the individual,” he said.

“The skills and experiences offered by the Reserves are tangible, effective and career enhancing.

“This results in committed, experienced employees who can take civilian qualifications to the Army Reserves to fulfil their military role and bring military experiences to the civilian workplace.”