A magnificent response to an annual appeal for Swansea Bay’s homeless community will really spread some festive cheer this Christmas.

And it’s the gift that keeps on giving, as the generosity of health board staff means the donations will last for many months to come. 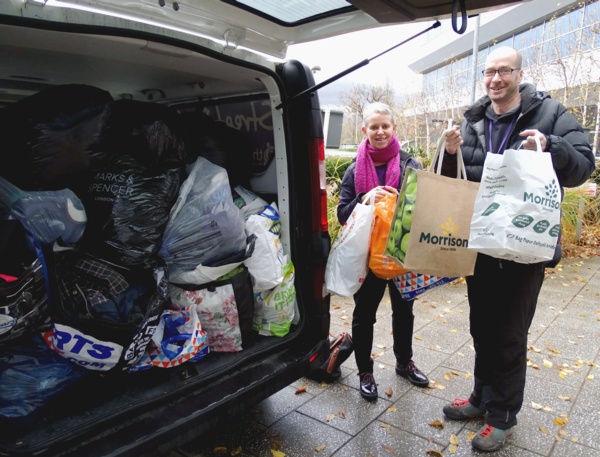 Left: Janet Keauffling and Daniel Warner from The Wallich fill a van with donations from the health board’s Baglan HQ

The health board’s sixth annual Winter Homeless Appeal has been another resounding success, with organisers inundated with donations.

Specialist homeless nurse Janet Keauffling said: “The response to this year’s appeal was a huge increase on 2018 – to the extent that we have been struggling to get it all collected and taken for sorting.

“We are delighted with the huge response from Swansea Bay staff again this year.”

Run in association with homeless charity The Wallich, the appeal helps rough sleepers in the Swansea Bay area.

Donations also support people who are vulnerably housed. These are former rough sleepers or homeless people who now have a roof over their head, but have little or no spare cash for clothes or toiletries.

The response was, as always, superb, with staff dropping off hundreds of bags filled with donations at Singleton, Morriston, Neath Port Talbot and Cefn Coed hospitals, along with the board’s headquarters in Baglan.

These were collected by volunteers with The Wallich, ready for distribution in the months ahead – donations usually last until the following September.

Janet added: “The items donated will make a big difference to the quality of the lives of people who are homeless.

“We are indebted to everyone who has donated.”