Speech and language therapist Sam Lloyd will be out and about on Morriston Hospital’s stroke ward on Christmas morning, helping ensure patients don’t miss out on their opportunity to enjoy a festive dinner.

People who suffer strokes often have difficulty swallowing, so the traditional turkey dinner may be off the menu for some.

Speech and language therapists assess patients’ swallowing ability and if they need help, can then order up dinners which are softer or even pureed. The therapists can also give the green light for standard dinners to be served up safely.

Sam, who leads the speech and language therapy service on Morriston’s Ward F - the stroke ward - explained that almost two-thirds of people who have a stroke have swallowing issues. 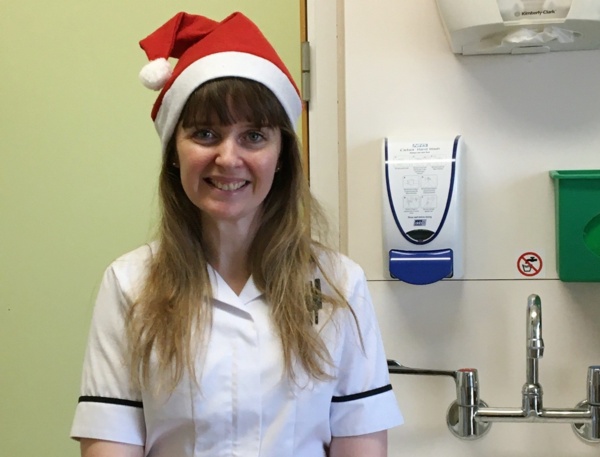 As well as new patients arriving on the stroke ward at Christmas, she will be able to re-examine patients who were admitted onto the ward before Christmas.

“By working on Christmas Day this means I can assess those patients who do have swallowing difficulties and they may be more likely to have a Christmas dinner, even if modified slightly. Hopefully this also means the ward staff feel more supported too.

“Last year our team had a patient who had a stroke in the autumn, which badly affected his ability to swallow. We worked closely with him and helped him to learn to swallow food safely again.

Sam will also be helping patients on the ward who have speech difficulties after their stroke, to communicate with their family and friends at this special time.

“If they are finding talking difficult I’ll be helping them to use other means, like a communication chart, alphabet chart, writing or gestures,” she explained.

Occupational therapy staff will also be visiting the ward on Boxing Day, and physiotherapists on New Year’s Day, to ensure stroke patients’ care continues on these bank holidays.